Start a Wiki
watch 01:24
The Loop (TV)
Do you like this video?
Julia's Theme refers to an alternative version of the usual theme, which was named after one of the show's creators, Julia Smith. It has been used in place of the regular theme 60 times as of 22 May 2015. This theme sees a change to the way an episode ends. Normally an episode ends with drums which are known to many as Doof Doofs. Julia's theme ends an episode with a slow buildup played on piano, usually after the departure of a character or a particularly emotional event.

Simon May's 1984 memo to the producers giving a breakdown of the various versions of the theme he had prepared refers to this as the "romantic pre-empt". The full version of the theme was featured on the B side of the original 1985 BBC theme tune 45 and also included on the compilation album Simon's Way the following year.

Used on Friday 10 April 1998 as Kathy leaves Albert Square behind for a new life in South Africa. As she departed London City Airport with Phil looking on, the theme started and Kathy took one final look at the place she called home, the East End of London; this theme is often mistakenly believed to be the "Jazzy" version of Julia's Theme which never got the chance to be used in 1993 however Julia's Theme was used twice in 1993 and neither time was this version.

Peggy's Theme" is a new variation of Julia's Theme, written by Simon May. It was featured in Barbara Windsor's farewell episode, transmitted on 10 September 2010, where it replaced the entire theme tune, and has since been used on a number of occasions at the end of episodes in place of the usual Julia's Theme. "Peggy's Theme" features on the album The Simon May Collection and was also released as an EP along with other EastEnders songs including "Anyone Can Fall in Love", "Every Loser Wins", "Glory Be (To God on High)" & "EastEnders Theme".

On 31 December 2011, it was announced May had reworked the show's theme tune for Pat Evans' (Pam St. Clement) final EastEnders episode.The new version, called "Pat's Theme", played out at the end of the character's last episode broadcast on 1 January 2012. An EastEnders spokesperson told Daniel Kilkelly of Digital Spy "It's only right that as we say goodbye to the iconic Pat Evans we pay tribute to such a character with a wonderfully touching special theme tune. The theme features a piano and no other instruments. It was also used as the opening theme to a documentary show, EastEnders: Farewell Pat that aired on BBC1. 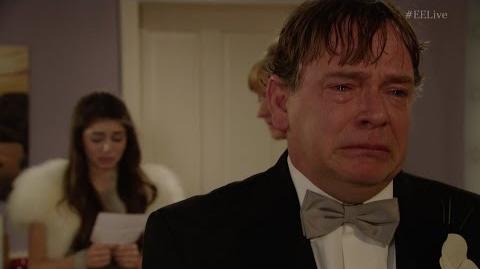 Peggy's Theme
Add a photo to this gallery
Retrieved from "https://eastenders.fandom.com/wiki/Julia%27s_Theme?oldid=144918"
Community content is available under CC-BY-SA unless otherwise noted.