Kofi Tavernier
Jules Tavernier made his first appearance 5 July 1990 . He is portrayed by Tommy Eytle.

Jules is from Trinidad, born there in 1918, and was 19 years old in 1937 when he remembers the oil crisis. Jules later lived in Jamaica until he came to England on holiday in 1968. He stayed to help look after his son's newborn child, so that his daughter-in-law could do teacher training and work part-time. Jules's wife had died young and he had never settled in Jamaica, so when his other grandchildren came along, he had a full-time job helping the family and remained in England.

Jules arrives in Albert Square in July 1990 with the rest of the Tavernier family. He is an instant hit with the older ladies of Walford, and he regularly flirts with Walford stalwarts Ethel Skinner and Dot Cotton. Jules is a gambling man, and could often be seen playing cards with John Royle when he was visiting from Ireland. Jules is an easy-going, jovial person and his main purpose in his early years is to give support to his family and offer advice. Jules is so at home in Walford that he decides to stay when his son and daughter-in-law move to Norwich in 1992; his grandchildren, Clyde and Hattie, remain with him. Jules is an independent person, despite his age, however this changes for a period in August 1992, after he is mugged by a couple of girls (one of the muggers was played by the singer Emma Bunton). After taking his money, one of the girls beats him over the head with a plank of wood. Jules is left shaken and ashamed by the ordeal. He eventually regains his health and confidence with the help of his friend, Dot, who nurses him better.

In 1993, Jules received an unannounced visit from Gidea Thompson, who is his granddaughter from an affair he had in his 20s. He soon bonds with her but is horrified when he finds out that she and his grandson, Clyde, are dating. Clyde ignores his grandfather's protests and eventually moves to Trinidad to be with Gidea. Both Nellie Ellis and Blossom Jackson live with Jules at different stages, but although they flirt with him, their relationships remain strictly platonic. In later years, he sparks up a friendship with local barber Felix Kawalski and the two are often seen playing chess in The Queen Victoria public house. Although he does not have an on-screen exit, it is believed that Jules is residing in sheltered accommodation away from Albert Square. His last appearance is in December 1997. 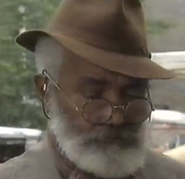 Retrieved from "https://eastenders.fandom.com/wiki/Jules_Tavernier?oldid=173926"
Community content is available under CC-BY-SA unless otherwise noted.