Joe arrives in Albert Square from Bolton in 1996, looking for his father, David Wicks, following the death of his sister Karen in a car crash. At first, David rejects his son, and sends him home. However, after Joe runs away again and turns up at David's, he becomes more receptive. Eventually, Joe and his mother Lorraine move to London and Joe moves in with David. Karen's death has seriously affected Joe and he blames himself because the day Karen died, they had had an argument over who would sit in the front seat of the car. Joe won and Karen was in the back when a lorry crashed into the car. Karen was badly injured and died whilst Joe escaped with minor injuries. This leads to Joe developing schizophrenia and exhibiting increasingly strange behaviour. Whilst suffering from schizophrenia, Joe attempts suicide and hides Nellie Ellis's dead cat Mandoo in a box in his bedroom and shocks his father when he covers his room with old newspaper articles relating to aliens.

While in Walford, Joe gets engaged to Sarah Hills but has a one-night stand with his second cousin, Mary Flaherty. This makes him realise that he is too young to get married, so he calls off the engagement. He and his mother, Lorraine, leave in 1997, returning to Bolton although Joe reportedly reconciles with Sarah many years later. In 2012, when David visits his mother, Pat, he tells her that Joe has a girlfriend who has children and that he stayed with them for a while but it did not work out. However, when David is arguing with Carol Jackson, it is revealed that Joe and David have lost contact and he has no address for his son. 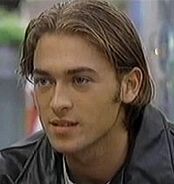 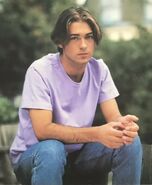 Joe Wicks Promo
Add a photo to this gallery
Retrieved from "https://eastenders.fandom.com/wiki/Joe_Wicks?oldid=190116"
Community content is available under CC-BY-SA unless otherwise noted.