Harry Gold
Jodie Gold made her first appearance 7 June 2010. She is portrayed by Kylie Babbington.

In Jodie's first appearance, she is found by Darren Miller in the road saying she is lost. Darren offers to help her and she agrees to go on a date. She then finds her mother, Vanessa Gold who hands her the keys to her new car, and Jodie reveals she got the job she had interviewed for at Roxy Mitchell's salon. The next day she goes for lunch with Darren and she thinks it is sweet when Darren reveals he has a son, George Trott. Their relationship gets off to a rocky start, especially when Darren accuses Jodie of stealing his World Cup tickets, but eventually they agree to have sex. However, when Jodie sees that Darren is not circumcised, she explains that she is Jewish and cannot have sex with a man who is not circumcised, though she does not go to a synagogue. This causes them to break up temporarily but they soon start dating again, saying they can wait to have sex. Darren has his circumcision in secret, telling Jodie he is on holiday. However, when Vanessa's affair with Darren's boss Max Branning is revealed and she is dumped by her husband Harry Gold, Jodie dumps Darren, thinking that he has been laughing at her, and disowns her mother. However, Jodie and Vanessa are reunited after a fire breaks out in The Queen Victoria public house.

Darren tries to win Jodie back by trying to explain that he had a circumcision but she will not listen to him because he did not tell her about Max and Vanessa. However, she finally reads a letter he wrote and they reunite. Vanessa ends her affair with Max so that Jodie and Darren can continue to see each other, and Jodie and Darren have sex for the first time. During a special lunch on Vanessa's birthday, Harry shows little interest in her, and Jodie tells her that she realises now that they are not happy together and urges her to go back to Max, which she does. When Harry issues Vanessa with divorce papers, saying he can convince Jodie to turn against her, she tells him he is not Jodie's father. Harry sends Jodie to live with Vanessa, and he later tells Darren he is not Jodie's father. Darren begs him not to tells her as it would break her heart but later Jodie says Harry phoned her and Darren assumes he told her, so he inadvertently reveals the truth. Jodie initially disowns her mother but when she tries to find a place of her own, she realises she needs Vanessa with her. Harry then starts to take revenge, including throwing a brick through the window and killing Jodie's cat. Vanessa tells Jodie she met a young Portuguese fisherman on holiday and he is her father, though she did not know his name.

During a New Year's Eve party, a drunken Jodie persuades Darren to tell her he wants to marry her. Darren is unsure at first but goes to propose, but she stops him as she was not serious. However, she is delighted that he would have asked her. In a conversation with her friend Poppy Meadow, Jodie says she wishes Harry would stop blaming her for something that was not her fault. She appears as a 'mascot' for the relaunch of the car lot, much to Vanessa's annoyance, though no one turns up as Darren did not send the fliers out, so he is fired. Jodie tells him that it will be okay, though he blames her for his sacking so she dumps him. She then goes to the R&R nightclub where she sees Darren kissing another girl; Jodie storms out of the club. However, she overhears him telling Abi Branning how much he still loves Jodie. Jodie walks in and he tells her he would not change anything about her and proposes; she accepts. Jodie then gets a job at The Queen Victoria as a barmaid. Darren gains custody of George, who keeps Jodie awake at night, causing her to be late for work where she is told by Roxy that there is a new manager of the salon, Tanya Branning. When Jodie is left alone with George, she struggles and leaves him with Heather Trott, George's mother. She later forgets, and when Darren calls her, she rushes back to Heather and takes George back without Darren knowing what had happened. Darren later finds out after George has an accident while in Jodie's care, and Jodie and Darren break up as she is not ready to be a stepmother. However, Darren decides George is better off with Heather, and he and Jodie reunite. Darren later goes to visit his family without Jodie. On his return, he starts stealing from work in order to pay for the wedding. He is soon discovered by [[[Jack Branning]], who informs Jodie and she calls off the wedding until Darren wins her back round. However, he then cheats on her with Jodie's friend Lauren Branning. Jodie finds them together and despite this, she decides that she still wants to marry Darren. However, before the wedding, Darren decides he is not good enough for Jodie and leaves Walford. Jodie is further dismayed when her mother, Vanessa leaves Walford, but is supported by Poppy, and the pair become flatmates. They rent a flat from Ian Beale, but when he increases their rent, they refuse to pay and Ian tells Jodie and Poppy to leave. They then move in with Anthony Moon and Tyler Moon.

It soon emerges that Poppy is attracted to Anthony, and Jodie tells him. Anthony prefers Jodie, but despite this, he asks Poppy out on a date. His feelings for Jodie grow and they later kiss, which leaves her feeling remorseful. Jodie decides to leave London because of the kiss. However, Poppy believes that Jodie is leaving as she is lonely without Darren, so sets her up with Tyler. Anthony stops Tyler from asking her out, though Poppy is confused by this and Jodie tells Poppy about the kiss. The next day, Poppy is still furious over the kiss and is not speaking to Jodie. Tyler tricks the two girls to meet up with each other, after Tyler sends a message on Poppy's phone to Jodie, forgiving her. They then repair their friendship. Jodie begins to miss Darren, and after being suggested by Poppy, she decides that she and Darren were meant to be together and goes to find him in Oxford, where Darren is staying with his ex-girlfriend Libby Fox. Poppy and Jodie go separate ways after saying an emotional goodbye, with Jodie finding Darren and Poppy moving back with her mother. 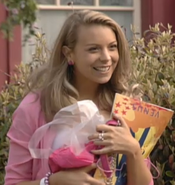 Jodie Gold - Name Card
Add a photo to this gallery
Retrieved from "https://eastenders.fandom.com/wiki/Jodie_Gold?oldid=178391"
Community content is available under CC-BY-SA unless otherwise noted.