James Archibald Branning was born on the 12th August 1933 in Walford. His grandfather James William Branning died in action when his grandmother was pregnant with his father. Jim was a boxer and gained the nickname "Basher Branning".

Jim met Reenie in the 1950s and they married in 1959 when she was pregnant with Derek Branning. 5 more children were born to the couple over the following years, April Branning, Carol Branning, Suzy Branning, Max Branning and Jack Branning. Jim was hardly ever there for his children as they grew up and was a pretty lousy father.

As a joke, Jim locked his son Max in a coffin when he was 13, however, this haunted Max for the rest of his life. He walked out of Carol's wedding because she was marrying a black man. He didn't talk to Carol for years and didn't care when his grandson Billie Jackson, who was black was born.

Jim first appears when his daughter April is supposed to marry her fiancé Nikos. When Nikos jilts April at the altar, Jim's second daughter Carol Jackson marries her boyfriend Alan Jackson instead. Jim is racist and therefore is against Carol marrying a black man. He storms out, refusing to give her away. Three years later, Carol visits him in Southend, and later that year Jim moves to Walford following Reenie's death and it does not take him long to chase after an eligible widow on Albert Square, Dot Cotton. She becomes his second wife, marrying him in 2002 after a proposal in the London Eye. After a mishap with viagra, Dot decides that their marriage should remain purely platonic. Jim also has to fight off attention from several spinsters, including Maureen Carter and Doris Moisey, the latter nearly causing the Brannings' separation.

Despite being overtly racist initially, these hostile feelings mellow, as shown through his close friendship with the Trinidadian shopkeeper, Patrick Trueman. Jim works as a potman, collecting glasses in The Queen Victoria public house, and likes to drink and gamble, to Dot's dismay. He is initially opposed to his granddaughter Sonia Fowler's lesbian relationship with Naomi Julien but later gives his blessing. He clashes with Dot after she takes in an illegal immigrant, Anya Covalenco, whose baby, Tomas, they find at a church. He reports Anya to immigration and she is taken into custody, but Dot keeps Anya's baby and makes Jim promise to look after him with her. In their old age, the Brannings struggle to look after the child, and Dot eventually listens to Jim's pleas and hands the baby over to social services.

Jim goes to stay with Carol after she is taken ill, but he suffers a stroke while he is there. Unable to take care of him, Dot has Jim admitted to a nursing home. He visits his family and friends in Walford several times, the first occasion being on his 75th birthday in August 2008 when his daughter Suzy Branning has come to stay. He later visits at Christmas, but continues to reject his son Max and animosity between them resurfaces. Following rehabilitation, Jim is permitted to return to live at home in 2009, now in better health. He can speak no more than a few words, but communicates through gestures and facial expressions, and uses a walking stick and wheelchair to get around. In February 2010, Dot's granddaughter Dotty Cotton attempts to get Jim sent back to the care home by pouring water on his lap to make it look like he has wet himself. However, Dotty is immediately caught out. As Dot and Jim celebrate their eighth wedding anniversary in The Queen Victoria, the police arrest Dot, ruining the party and distressing Jim. He draws a picture of him and Dot as an anniversary present for her. Jim and Max bond over the death of his grandson, Max's son Bradley Branning and he comforts Max on the day of the funeral, kissing his hand. When Jim's youngest son Jack Branning is in a coma after being shot, Jim is present when he is woken up by medical staff. Jim then cries when he finds out Jack is paralysed, knowing the pain of living with a disability. Jim and Dot are later befriended by teenager Fatboy. A few weeks later, when his grandson Billie Jackson dies (October 2010), Carol goes to visit Jim, who starts crying, and she breaks down in his arms.

When Carol sees Dot and Jim have no photos of Billie, she accuses them of racism. Dot says she asked Billie for photos but was not given any, and tells Carol to leave, which she does after she sees Jim nod in agreement to Dot. When Carol later arranges a family meal, she invites Jim and Dot to attend. Dot initially refuses, but later forgives her and states that Jim is still upset about Carol's accusations, so she attends alone. However, Carol shouts at Dot after a family argument, saying that she meant what she said to Jim. Carol then spends Jack's wedding day with Jim after they have reconciled. Jim later spends time in respite care after Dot fractures her wrist. In May 2011, she hires a carer, Marta Demboski, and asks her to help look after Jim when he returns, but sacks her when she think she has stolen money. Dot subsequently struggles to cope with Jim and is distressed by the constant noise of his buzzer. She tells Jim that she cannot cope and later asks Carol why she had to meet Jim "so near the end". Carol, Max and Jack help Dot to make the decision to put Jim into permanent care, and he is taken away in an ambulance. Carol visited Jim in January 2014 (however, only the hand of a stand-in was seen on screen).

In April 2015, Carol receives the news that Jim has died after suffering a heart attack. Sonia informs Dot, who is in prison awaiting trial for the murder of her son, Nick Cotton. Carol also tells Patrick that Jim is dead, while Sonia tells Max. Max and Carol struggle with the fact they disliked their father for a large amount of his life and thus having to mourn for him. Dot initially refuses to attend the funeral, believing she was negligent of him in his last days and this is what led to his death. She eventually changes her mind and the Brannings hold Jim's funeral.

1. Joey - Accidentally sucked him up a vaccum cleaner.

2. Joe Macer - Not that he actually killed him, both he and his wife Dot Branning played a major part in his demise, which lead to Joe accidentally falling though the upstairs glass window, and plunging to his death, after he was exposed as Pauline Fowler's killer.

An old picture of Jim Branning, Jack and Max 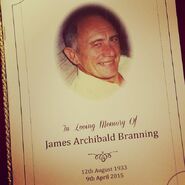 Scattering Jim's Ashes (2015)
Add a photo to this gallery

Jim Branning - Name Card
Add a photo to this gallery
Retrieved from "https://eastenders.fandom.com/wiki/Jim_Branning?oldid=189064"
Community content is available under CC-BY-SA unless otherwise noted.