Marsden first arrives in Albert Square in March 2001, investigating Phil Mitchell's shooting in her first case as detective chief inspector. She identifies the five main suspects: Ian Beale, Dan Sullivan, Steve Owen, Mark Fowler and Lisa Shaw. Marsden arrests Dan for the shooting, although he is later acquitted due to lack of evidence. Dan was set up by Phil but it was, in fact, Lisa who shot him. Marsden later arrests Little Mo Slater for the attempted murder of her husband Trevor Morgan. Little Mo claims self-defence, since she has been a victim of domestic violence at the hands of Trevor. The trial ends, with Trevor's treatment of Little Mo revealed. In 2003, Sonia Jackson visits Marsden with evidence that Phil killed his ex-girlfriend Lisa. Jill helps set up a honey-trap for Phil in order to obtain a confession from him, with PC Kate Morton and DI Dominic Price, but it fails when Kate falls in love with Phil and Marsden fires her. Marsden arrests Phil, but with insufficient evidence and no confession he is released. It later emerges that Lisa is safe and well, and Phil is innocent. Marsden later arrests Phil when Dennis Rickman and Den Watts set him up in an armed robbery.

Marsden reappears on Albert Square in 2009 when Archie Mitchell is murdered. She arrives on the scene when several people say they suspect Janine Butcher, but Marsden waits before questioning her, and questions the Mitchells first. She makes a televised appeal for witnesses and later interviews Phil, but he is provided an alibi by his girlfriend Shirley Carter. A few days later, a red fingernail is found at the scene of the murder; Marsden visits the female locals, checking their hands. Seeing an upset Heather Trott, knowing that she is vulnerable and lives with Shirley, she talks to Heather about Christmas Day and Heather accidentally tells Marsden that Phil wasn't there. Marsden interviews Phil and later visits his home, asking to see the clothes he was wearing on Christmas Day. Shirley shows her a clean shirt; Marsden closes the laundrette, hoping anyone with blood-stained clothes will not be able to wash them. After a tip-off Marsden arrests Sam Mitchell; Sam accuses her mother, Peggy Mitchell, of the murder. Marsden confirms that she was there to talk to Peggy, questioning Peggy and Sam at the police station. Peggy is released without charge; however, Sam is detained for jumping bail. Marsden visits Janine, who insists that people will say anything to get her in trouble. She asks Janine why she was out in the cold on Christmas Day, and asks if Janine knows where Archie's laptop as it had gone missing.

On 18 January, Marsden arrests Ian after Janine told her that Ian took advantage of her, stole Archie's laptop, which had a recording of them having sex on it, and dumped it in the canal. Ian refuses to talk, but when Marsden shows him CCTV footage of him dumping the laptop, and then shows him the recovered laptop, he admits visiting Archie on Christmas Day, claiming that Archie was threatening him. He wanted to delete the recording and denies murdering Archie, but Marsden charges him. Days later, Janine tells Marsden she saw Ian leave the Queen Victoria on Christmas Day but the bust of Queen Victoria was on the bar after he left. Marsden places Janine at the scene, but she also denies murdering Archie. Marsden tells Ian that although the murder charge will be dropped, he will still be charged with burglary and theft of Archie's laptop. She and DC Wayne Hughes attend Archie's funeral, watching people's reactions in the hope of a new lead. Peggy returns to Archie's grave; when Marsden asks why, she explains that she didn't believe him when he said his cancer had returned.

The following week, Ronnie Mitchell spots her ex-boyfriend Jack Branning talking to Marsden; Jack tells Ronnie that he was fishing for information. With no new leads, Marsden's boss threatens to take her off the case. She reviews the suspects and decides to question Jack, since he is asking more questions than he has answered. In the café Marsden and Hughes discuss new information she has obtained, ensuring that she is overheard. Chinese whisper-style rumours circulate, ending with the certainty that Marsden would arrest Ronnie. Ronnie sees Marsden in the Square, and a struggle ensues. She knocks Marsden down, is arrested and charged with assaulting a police officer but is released on bail. Marsden suspects Ronnie further, saying that she has now shown her true colours. Later, DC Jasmine Field enters the pub with other officers to arrest a suspect; frightened, Ronnie leaves Walford. The police officers are there to arrest Dot Branning, who was accused by Dotty Cotton after Dot slapped her. Jack confronts Marsden for unnecessarily sending a uniformed officer to arrest Dot and unsettling the locals, and realises there was no new information.

Janine tells Marsden that Ronnie has fled, but Marsden finds her at the Queen Vic. Marsden remarks that a new forensic profile has been found, and DNA screening of white males will shortly begin. After Hughes accepts a bribe from Jack to make the DNA samples disappear, Marsden receives an anonymous tip-off. The police search Janine's flat, finding the engagement ring that went missing the night of Archie's murder, and Janine is arrested but later released for lack of evidence. Becca Swanson calls the police, saying that Bradley Branning attacked Archie on Christmas Day, and the police arrive to arrest him. Marsden spots him when his phone rings; two officers chase him to the roof, where he stumbles and falls to his death. The investigation ends, since the police believe that Bradley had killed Archie; however, his killer was actually Stacey Slater.

In January 2012, Denise Fox gives Marsden a letter incriminating Phil in the death of a homeless man, who died when he torched the car lot in an insurance scam in 1994; she adds that Phil also murdered Stella Crawford, and Marsden thanks Denise for the information. Marsden arrives in Walford and begins trailing Phil. She asks Denise not to tell Phil that she is in town, wanting to ensure Phil's imprisonment. Marsden then targets Phil's son Ben, interviewing him about Stella's death. Ben was abused by Stella and finds Marsden's questions distressing; however, she continues to press him. After a falling-out with Phil Ben changes his statement, telling Marsden that Phil told Stella to jump off a building or he would push her. Marsden then arrests Phil for murder, and Ben reveals he was stalking him. She informs Phil's partner, Shirley, that he has been charged with Stella's murder. Ben pleads with Marsden to keep his statement a secret from the Mitchells, but she tells him he must accept that his father will learn about Ben's involvement in his arrest eventually. After discovering Ben's lies about Phil, Ian then passes this information on to Marsden and Ben is arrested. On the day of Phil's release he helps Ben hide his involvement in Heather's murder; Marsden tells Phil at the police station she will contact him about Ben's accusations. The charges against Ben are dropped; Marsden visits Phil, taunting him that he will eventually slip up, and suggests that Ben may ultimately bring Phil down.

In August, Marsden reappears when Ben confesses Heather's murder. She does not believe his confession, thinking it is another lie to get attention from Phil. However, Ben is arrested and charged with the murder after Marsden helps DS Luke Crisp convince Jay Brown to implicate Ben as Heather's killer.

In 2015, Marsden arrives again as she is brought in to take over the Lucy Beale Investigation and was seen knocking at Phil Mitchell's house on the episode dated 16th July. In the following episode we see Marsden going against the rules by getting photographs of Ben Mitchell as she brings in the Taxi driver that night, but when Ritchie Scott turns up as Ben's brief she has ago at Marsden for not going by the rules and should know better in her position - she then tells her that she will be talking to her Chief about all of this. But as Bobby Beale was revealed as Lucy's real killer, she also gets fired from her job for wrongfully arresting Ben and wrongfully convicting Max Branning. 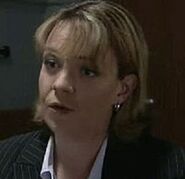 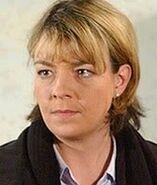 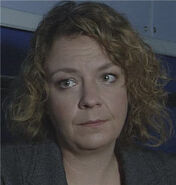 Promotional photo
Add a photo to this gallery

Retrieved from "https://eastenders.fandom.com/wiki/Jill_Marsden?oldid=168969"
Community content is available under CC-BY-SA unless otherwise noted.