Melanie Owen
Katie Healy
Jeffrey "Jeff" Healy made his first appearance 9 December 1997. He is portrayed by Leslie Schofield who had previously acted the role of Brian Wicks in 1988 and 1989.

Jeff is an atheist who disapproves of his son, Alex being a vicar. He first arrives in Albert Square in December 1997 to try and rebuild bridges with Alex. One of Jeff's daughters, Melanie, makes a reappearance in his life and the three of them gradually begin living as a family again. Jeff has a brief courtship with Pauline Fowler but is rejected when he proposes to her. Jeff leaves Walford in August 2000.

Jeff's grandson Hunter Owen had the middle name of Jeffrey, after his grandfather. 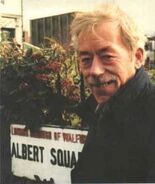 Jeff Healy
Add a photo to this gallery
Retrieved from "https://eastenders.fandom.com/wiki/Jeff_Healy?oldid=192195"
Community content is available under CC-BY-SA unless otherwise noted.