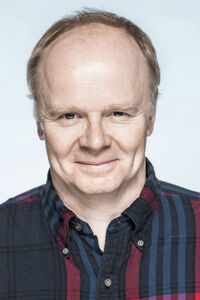 Jason Watkins is an English stage, film and television actor who appeared in the minor role of Gerry Fairweather in EastEnders from 1987 and 1988.

Watkins was born on the 28th October 1966 in Albrighton. He trained at the Royal Academy of Dramatic Art and established himself as a stage actor. He is now a member of the National Theatre company. He debuted his television career in EastEnders, as the estate of local Walford's local wine bar The Dagmar in 1987, however, this was only a minor role in the soap. After leaving the soap, he went on to pursue a successful career in television series' in shows such as The Buddha of Suburbia, Grown Ups and Duck Patrol, and he has acted in both the Doctor Who franchise and Eon James Bond franchise. Altogether, Watkins has appeared in a huge 109 productions, that's not including his stage roles either. In 2001, he was nominated for a Laurence Olivier Theatre Award in 2001 (2000 season) for Best Supporting Actor for his performance in A Servant for Two Masters at the Young Vic and New Ambassadors Theatres. His last known contribution to television was in the Netflix series The Crown appearing as Harold Wilson in 2019.

He is married to Clara Francis and they have three children together. He once said in an interview that Mike Leigh inspired him to become an actor.

Retrieved from "https://eastenders.fandom.com/wiki/Jason_Watkins?oldid=149521"
Community content is available under CC-BY-SA unless otherwise noted.