Janet is born on 4 September 2006, the day of her parents' wedding. Billy and Honey Mitchell had already agreed to name the baby Janet, after Honey's mother (Janet Bishop). Janet is diagnosed with Down's syndrome shortly after her birth. Honey has trouble coming to terms with Janet's condition, and when it is revealed that Janet needs a heart operation, Honey says it will be better for everyone if the baby dies. Honey then refuses to let the baby be named Janet, as she does not visualise "Janet"'s future that way. Billy has already started calling her "Petal" as a term of affection, so suggests that they name her that.

Petal is brought home from the hospital, and Honey finds it hard to cope, wanting to have her adopted. She considers smothering the baby with a pillow, but cannot do it. Honey runs away to her father, Jack's canal boat in Kent. Billy tracks her down and takes "Petal" with him. He puts her by the canal, saying that people used to leave babies with Down's syndrome outdoors overnight, and if the baby survived, they'd keep it. Honey is shocked by Billy's actions and he picks her up and they go home. Despite her father's courage and love for her, her mother's fear of bringing up a child with Down's Syndrome wins out, and the pair put her up for adoption, giving her up to a foster family, Kim and Tony Smith, just prior to Christmas. However, when "Petal" is taken into hospital for major surgery, Billy goes to see her, and when Honey reads Billy's letter to an adult "Petal", she follows, walking in on her Christening, and announcing her name, Janet. Doctors say she will be fine after surgery. Janet moves away with Honey and William, after Billy's relationship with Honey didn't work out. However, they still go to visit Billy every Saturday.

In May 2010, Billy is forced to look after Janet and William Mitchell, after Honey Mitchell and Jack are involved in a car crash. He struggles to tell them that Jack has died, and that Honey is in a critical condition. Later that night, Billy finds Janet playing with the drugs that Billy had been attempting to sell before he found out about the crash, and with that, he sends her to Phil's. In July 2011, Janet and William meet their niece Lola Pearce. William and Janet later appear when Billy is carrying the Olympic torch for the London Olympics 2012 in a special live segment of the soap. Janet returns on 24 February 2014, with her brother, William. She returns again on 27 May 2014, when Honey visits Walford to tell Billy that she is moving to Canada with the children. Billy is devastated and burns Janet's passport to try and stop them from leaving. Honey remains determined, but decides to leave Janet with Billy, when she realises how well she is doing in the UK. Janet says goodbye to Honey and William, before officially with Billy, Lola and Lola's young daughter, Lexi Pearce. Janet school is doing a charity swim and a parent needs to swim Billy Cant Swim, Honey's Gone so Mick Carter can face his fears.

Janet Mitchell as a Baby 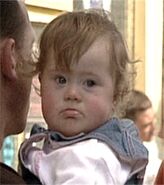 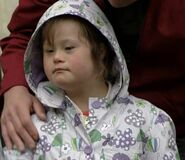 Janet Mitchell and Will Mitchell, Billy Mitchell and Honey Mitchell
(17 January 2020)
Add a photo to this gallery
Retrieved from "https://eastenders.fandom.com/wiki/Janet_Mitchell?oldid=199060"
Community content is available under CC-BY-SA unless otherwise noted.