Complications after a heart attack

Ex-army officer Wilmott-Brown's first appearances in Albert Square was at The Queen Vic, as area manager for Luxford & Copley brewery. He soon left the company to acquire and refurbish The Dagmar, and became a permanent Walford resident, buying and moving in to 43 Albert Square. He represents the new wave of yuppies seeing opportunity in the run-down East End, and his original intention once The Dagmar got up and running was to repeat the process with two more old locals, building a small empire for himself. Initially he is respected, liked, and makes an effort to integrate with the local working-class community. However by 1988 a growing and unhealthy obsession with barmaid Kathy Beale leads to his huge fall from grace.

His brief affair with Debs didn't rock his boat, so the smooth-talking ladies' man tricked unsuspecting Kathy into a compromising position, and raped her in July 1988. He was imprisoned in April 1989 for the offence. Kathy tricked him into allowing him to bribe her while a policeman was waiting, and recording the conversation, and who heard him confess to the rape.

He was released in January 1992 and returned to Walford. Despite his protestations of innocence, it turned out that he had form for the same offence - and when he came crawling back, asking her to start again, he was given short shrift and the mob ran him out of Albert Square. Willmott-Brown was later imprisoned as Phil Mitchell tracked his wife down in April 1994 and she said he was in prison again for raping another woman.

He returned on the 22nd September 2017 and is revealed to be Fi Browning, Luke Browning and Josh Hemmings's father.

In December 2017, the entirety of the Willmot-Brown family enter the Queen Victoria, and reveal to everyone that Weyland&Co own Grafton Hill, and as a result the pub, much to Kathy's horror. They serve the Carters with an eviction notice for the Queen Victoria pub.

After this, Max proposes to Sophie. He only holds the box out, and James (Sophie's father), tells him to get down on one knee and ask properly. He asks properly, but doesn't get on a knee. She starts shaking her head and stutters Max's name. James starts laughing, and Max asks him what is going on. James tells him he has been useful, but all good things come to an end. He shows him a cheque for 350,000 pounds payable to Max, and throws it in the fireplace. The Willmott-Brown family are thrown out of the pub by the Carters.

Two days later, James is seen instructing Weyland & Co employees to persuade people in the area to sell their homes and businesses, as members of the Square look on.

The following day, Mick calls James in for a word in the Queen Victoria. The Carters tell him they want the money they paid Weyland&Co back. Johnny tells him he won't have a leg to stand on if it goes to court. James tells him his legal team have been working overtime to figure out why some of the signatures on the Weyland&Co documents differ, and says it suggests forgery.

On 28 December 2017 he was seen telling Fi, his daughter, that he keeps some documents in his safe that could have the potential to bring Weland&Co down. Fi then brings up Kathy's rape and she says she believes Kathy's story and James reacts really badly and he has her escorted of the premises and shouts to take away her security access. He then goes to Kathy's shop and they talk about what happened and that he was was wrongly imprisoned in April 1989. He tries to kiss her but she rejects him and grabs him and threatens him saying if she ever saw him again she would find the sharpest knife and serve it to him in a sandwich after which he leaves her alone.

Previous to his return at the office, Fi enters the office and breaks into his safe stealing the crucial documents and handing them into the police. James returns to the office and pours himself some whisky and then he notices his desk has been trashed and he sees his safe open and realizes the crucial documents are missing and the police are attempting to break into his office he tried to shred the rest of his documents and then he suffers a heart attack cause of Kathy's threat just as the police enter the room.

Sophie later forces Hugo Browning into signing the deeds of all the Walford properties over to her, therefore ending Weyland & Co. 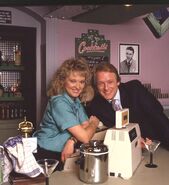 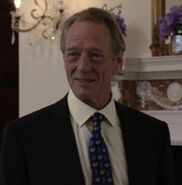 Willmott-Brown on Christmas Day 1986 with his blue Ford Sierra 1.8L Estate
Add a photo to this gallery

Retrieved from "https://eastenders.fandom.com/wiki/James_Willmott-Brown?oldid=155280"
Community content is available under CC-BY-SA unless otherwise noted.