James Branning was born on the 30th December 2010 to Ronnie Mitchell. Ronnie was there along with his aunt Roxy Mitchell but his father Jack Branning was absent due to working abroad.

On the 31st December 2010, James returns home from the hospital and his mother parades him around the square happily but sadly later that day Ronnie wakes up to find that James has died of Sudden Infant Death Syndrome. Ronnie, devastated to find James dead runs across the square with him in her arms. She slips through the back of the pub and sneaks upstairs and swaps him with Tommy Moon, Another baby boy who was also born the day before.

For the next few months James was presumed to be Tommy Moon and was buried as such. In April 2011 when Ronnie finally admitted the truth she was arrested, Tommy was returned to his parents and Jack changed the gravestone to read James Branning. Roxy then puts some flowers on James' grave.

On January 1st 2017 both his parents visited his grave before their wedding where his mother and auntie died. 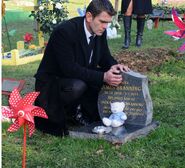 James Branning's Gravestone (1 January 2017)
Add a photo to this gallery
Retrieved from "https://eastenders.fandom.com/wiki/James_Branning?oldid=173719"
Community content is available under CC-BY-SA unless otherwise noted.