Jaggat first arrives in Albert Square in November 1986. He is employed by Dr. Harold Legg to cover Walford Surgery for him several days a week.

Naima Jeffery shows a romantic interest in Jaggat and they go on several dates. Naima's cousin Rezaul Gabir is furious as Jaggat is a Sikh and Naima is Muslim, and he tries to provoke Jaggat into a fight in The Queen Victoria one night. However, Jaggat just laughs off Rezaul's aggression and they eventually become friends. In the end nothing serious ever develops between Jaggat and Naima anyway, as Naima ends the relationship to marry Farrukh — a suitor from Bangladesh.

Having Lou Beale, Ethel Skinner and Dot Cotton as patients sharpens his interest in the elderly and Jaggat leaves the Square in December 1987 for full-time work with old people in a Northern home. Shortly before leaving, he persuades Ethel to move into sheltered housing at Prosper Estate. 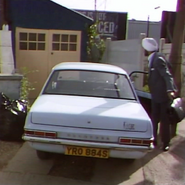