Chris
Jack Evans made his first appearance 11 January 2002. He is portrayed by Samuel and Joseph Timson.

Jack is the son of Barry and Natalie Evans. He has a traumatic breech birth early in 2002. He is named after Natalie's younger brother. Jack initially lives with his parents, his grandfather Roy Evans and Roy's wife Pat Evans, but moves out of Albert Square in March 2003 following his parents' divorce. Barry is devoted to Jack and agonises over the fact that he cannot be a full-time father to him.

Jack's father meets an untimely demise early in 2004 and, as no will is in place, Barry's new wife Janine Butcher inherits all Barry's money and assets, leaving Jack with nothing. When Jack's mother suspects that Janine was responsible for Barry's death, she leaves Walford for a new start with Jack. Before they depart, Natalie and Jack plant a tree on the Square in Barry's name. Jack's last appearance is in May 2004.

Natalie and Jack and Barry Evans. 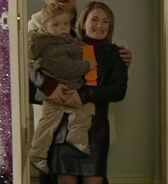 Retrieved from "https://eastenders.fandom.com/wiki/Jack_Evans?oldid=184278"
Community content is available under CC-BY-SA unless otherwise noted.