Dalgliesh
Jack Edwards made his first appearance 27 February 2006. He is portrayed by Nicky Henson.

Jack is the father of Honey Mitchell. The character was to have been played by former musician David Essex, originally for only 3 weeks, but Essex pulled out when the role expanded and he was unable to commit to the increased time. The role was re-cast and Nicky Henson played the part.

Jack has a dog called Dalgliesh and a narrowboat called Patonia. He initially shows a strong dislike of his daughter's fiancée, Billy Mitchell, and poses as a plumber to get to know what Billy is really like. He also has a crush on Peggy Mitchell. Jack leaves Walford to complete a job, but returns in July for Billy and Honey's wedding and continues flirting with Peggy. They get together, but split up when Peggy refuses to accept Jack's newborn granddaughter, Janet, who has Down's syndrome. He reappears again in November when Honey runs away from Billy and Janet.

Since his departure, Jack is mentioned in February 2008 when Billy and Honey announce to Peggy that they are going to visit him for a week on his narrowboat with Janet and a newborn baby William. He is then mentioned again in September 2008 by Billy, who tells Archie Mitchell that Honey has taken the children and left him, moving in with Jack. In May 2010, Billy is told that Honey and Jack have been involved in a car accident and Jack has died. 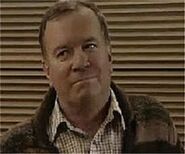 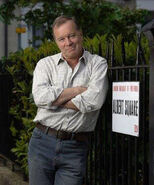 Jack Edwards
Add a photo to this gallery
Retrieved from "https://eastenders.fandom.com/wiki/Jack_Edwards?oldid=150514"
Community content is available under CC-BY-SA unless otherwise noted.