Former; guest
Jack Dalton made his first appearance 12 May 2003. He was a gangland boss and the head of Walford's criminal organisation, The Firm. Jack was shot dead by his employee Dennis Rickman. He is portrayed by Hywel Bennett.

Jack Dalton was born in July 1943 in Walford. He grew up in the area and became a career criminal. By the 1980s he was a fearsome gangland boss and ordered the shooting of Den Watts in 1989. Actually Jack had got Mr Vinnicombe killed for failing to kill Den, who had escaped abroad for a new life, and had dumped Vinnicombe's body in the canal. His teeth were bricked so as to avoid dental records identification. Jack took over as boss of The Firm.

In the late 1980s, Den became involved with "Walford Investments", aka The Firm, and was forced to become the titular manager of Strokes wine bar (formerly Henry's), which was owned by The Firm and was really a front for illegal gambling. Strokes had a rival bar in the form of The Dagmar, fronted by James Willmott-Brown - who himself went on to rape Kathy Beale, the wife of Den's best friend. Den used his connections with The Firm to arrange for The Dagmar to be torched. The fire drew attention to the illegal goings-on at Strokes, and thus greatly angered The Firm. Den refused to take the blame and The Firm believed that he had informed the police about them. Consequently, Dalton decided to have Den murdered, and two of their members followed him to Manchester in September 1988 when he went there to seek refuge with a friend. However, he managed to outrun them in his friend's car and handed himself into the police, who remanded him in custody on an arson charge until he appeared in court the following February.

In one of the series' most famous exits, Den (who just hours earlier had escaped after members of The Firm had intercepted the taxi taking him to court) was shot as he walked by the canal by a member of The Firm, who was walking with a woman and had a gun hidden in a bunch of daffodils. Three weeks later, spots of blood were found on the canal towpath and the police identified this as Den's blood, and believed that he had been murdered. However, an initial search of the canal failed to uncover his body. In May 1990, a local boy was fishing in the canal when he discovered Den's distinctive signet ring, prompting another search of the canal which this time uncovered a body which was identified as Den's.

In May 2003, Jack Dalton was employing local hardman Dennis Rickman. When Jack learns that local resident Spencer Moon has been using forged currency in his nightclub, he orders Spencer to get beaten up - but Spencer's brother Alfie takes a beating for Spencer. Jack finds that his secretary, Kate Morton, is an undercover policewoman and he orders his right-hand man George Peters to kill her; however, Kate's would-be husband Phil Mitchell foils the assassination and persuades Jack to call it off. Jack does so but says Phil owes him a favour.

Jack calls in the favor by ordering Phil to kill Dennis Rickman for blackmailing him. Jack is later told that Dennis is the illegitimate son of Den Watts. Unfortunately for Jack, Dennis manages to convince Phil that he will murder Jack himself so the two of them will be free of him for good. Armed with a gun, Dennis forces Jack to drive into the woods and to the edge of a railway track where he duly murders him as a train roars past and drowns out the gunshot sound. Before dying, Jack reveals the truth about Den Watts, that he is in fact alive. He begs Dennis that this "has to make a difference" in the hope that he will not shoot him, but Dennis goes ahead and shoots Dalton in the head, killing him instantly. Dalton's reign of terror is over.

Ordered the hit on Den Watts 1989 apparently killing him 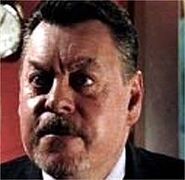 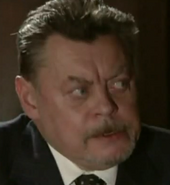 Jack Dalton in 2003.
Add a photo to this gallery

Retrieved from "https://eastenders.fandom.com/wiki/Jack_Dalton?oldid=206783"
Community content is available under CC-BY-SA unless otherwise noted.