In For A Penny

In For A Penny is a shop located on 7 Turpin Road in Walford. It is next to George Street Bus Stop.

Before the Office was ran by Zainab Masood it was called Brindleys Post Office.

The Post Office was owned by Zainab Masood but the Masood become in debt and then eventually forced to close the Post Office.

Gilly's Massage was a Massage Parlour located on 7 Turpin Road for a short period of time due to the shop being a front for a brothel and the protests of local residents such as Heather Trott, Patrick Trueman, Peggy Mitchell and Charlie Slater.

Zainab refusing Bianca a job in the Post Office 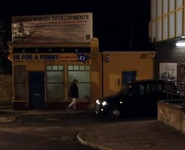 In For A Penny

In For a Penny (2016)
Add a photo to this gallery
Retrieved from "https://eastenders.fandom.com/wiki/In_For_A_Penny?oldid=141471"
Community content is available under CC-BY-SA unless otherwise noted.