Hayley Edwards
Huw Edwards first appeared 28 May 1996. He is portrayed by Richard Elis.

Huw is an amiable Welshman from Pontardulais, who is best friends with Lenny Wallace. They live in a squat in Albert Square, enjoying loud music and winding up Ian Beale. Lenny and Huw also operate a pirate radio station from the premises for a while. Ian tries to get them evicted several times — once calling the council to complain about noise pollution — and Lenny and Huw do everything they can to annoy him further.

During his time in Walford, Huw works in George Palmer's nightclub as a barman and in the café as a waiter. In 1998 Huw develops a crush on Ruth Fowler. Ruth sees him only as a platonic friend and unwittingly lets him get his hopes up for a relationship for a period of time. Huw eventually leaves the Square to live with Carrie Swann, an artist who is exhibiting her abstract art in the café. 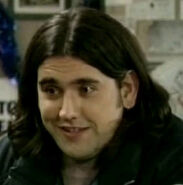 Lenny Wallace and Huw Edwards (25 December 1998 - Part 1)
Add a photo to this gallery
Retrieved from "https://eastenders.fandom.com/wiki/Huw_Edwards?oldid=175697"
Community content is available under CC-BY-SA unless otherwise noted.