Caroline Bishop
Susan "Honey" Mitchell (née Edwards) is the daughter of Janet Bishop and Jack Edwards, ex-wife of Billy Mitchell and mother of Will and Janet.

Honey is introduced in November 2005, employed by Yolande Trueman as a "honey trap" to see if her husband Patrick Trueman is willing to commit adultery. Honey causes confusion by mistaking Billy Mitchell for Patrick, but truth prevails, and Honey and Billy become friends. Honey has aspirations to become a model. Billy helps her find employment, acting as her manager. Billy and Honey are attracted to each other, and after a period of trepidation, they finally confess their feelings and became a couple in December 2005. The following month, Honey falls pregnant. Overjoyed, Billy proposes and despite initial objections from her father, Jack Edwards, Honey says yes. When Jack discovers that Honey is pregnant, he tries to persuade her to abort her unborn child, convinced that she would share the same fate as her mother. Not wanting to lose Honey, Billy insists that she enquire about an abortion but a check-up reveals that Honey does not have the same heart defect as her mother, so there is no danger of her dying of the same cause. Honey is furious with Jack for making her so unnecessarily fearful about her health all her life, and chastises him for not getting her heart checked when she was a child. She eventually forgives her father, and begins enjoying the prospect of becoming a mother.

Honey and Billy's first attempt at getting married in June 2006 ends in disaster when Honey is admitted to hospital, due to food poisoning. They try again in July, but due to a series of unfortunate events — starting with a prank performed on Billy's stag night — the groom doesn't get to the ceremony on time. Their third attempt in September is arranged as a surprise by Peggy Mitchell. Honey is heavily pregnant and goes into labour, during the ceremony. As Billy leans in for a kiss after they are pronounced husband and wife, Honey reveals that her waters have broken. Honey gives birth to a girl, Janet (named after Honey's mother), but her happiness is short-lived when she discovers that Janet has Down syndrome. Devastated, Honey rejects her baby, changing her name to Petal, as she does not have the "perfect" Janet she had wanted. Honey and Billy go to a support group for parents of children with Down syndrome, but this depresses Honey further. She breaks down and destroys Petal's nursery, admitting to Billy that she wants to put Petal up for adoption. Billy is against this and their relationship suffers as a result. Honey tries, but cannot accept her baby and at her lowest ebb, considers smothering Petal with a pillow, but cannot do it. Petal is fostered by Tony Smith, and Kim Smith in December 2006, but the next day, Dr. May Wright tells Billy that Petal needs a heart operation. Billy arranges for Petal to be baptised in case she does not survive, and after reading a heartfelt letter from Billy to Petal, Honey decides to keep her daughter after all. She attends the baptism and informs the vicar that the baby's name is Janet. Janet's operation is a success, and Honey begins to bond with her.

In March 2007, Honey discovers she is pregnant again. Billy is apprehensive, fearing that they might love the new baby more than Janet, but Honey soon reassures him and they look forward to the arrival of the second baby. However, in November 2007, Honey is knocked down whilst trying to stop Jase Dyer being attacked, sending her into labour. She is rushed to hospital where she gives birth to a boy, who initially appears stillborn, but is resuscitated, and is named William after his father. The Mitchells are happy until December 2007, when their landlady, Manju Patel, threatens to evict them. Billy is unable to raise their rent money and despite attempts to barricade themselves in the flat, Mrs. Patel evicts them, leaving the entire family homeless before Christmas. They are forced to rely on relatives and friends for accommodation, before being rehoused at Walford Towers. Money becomes an issue for the Mitchells again in August 2008. Desperate, Billy takes a job as a getaway driver for Jase, who is in league with Terry Bates, the man responsible for the pub riot that caused Honey an injury the year before. The job is a ruse, set up by Terry as revenge on Jase; Jase is stabbed and killed. Honey is devastated to learn that Billy was indirectly involved in the incident that led to Jase's death, particularly when she discovers that instead of trying to rescue Jase, Billy hid in the bathroom in fear. She is further incensed to discover that Billy has kept Jase's "blood money". She throws Billy out, only agreeing to take him back when Billy donates the money to charity. Honey tells Billy she will take him back if he promises never to lie again. Billy does so, but when Honey discovers that Billy still has some of Jase's money, she decides that she can no longer trust him. She ends her marriage and leaves Walford with their children on 2 September 2008. Honey tells Billy that she will never stop him seeing the kids because she does not want to see them suffer because of their father's mistakes. In September 2008, it is revealed that Honey and the children are now living with Honey's father, Jack. In May 2010, it is mentioned that Honey and Jack have been involved in a car crash, and Billy is given temporary custody of Janet and William. Jack dies and Honey is left in a critical condition. It is then revealed that Honey has recovered, and has resumed custody of Janet and William.

Honey brings the children to visit Billy and asks to meet up with him. Billy assumes it is a date and confesses his love, however Honey reveals that she wants to move to Canada for a year and take the children. Billy vows to stop her, he destroys Janet's passport and abducts her and William, but Phil convinces him to return. Honey agrees to let Janet stay with him while she takes William. She returns again to visit Billy the next year, and goes back to his flat to see Janet, but discovers Billy has stolen items in his flat (which he had moved for his cousin Ronnie Mitchell. He convinces her that he has changed, and after she listens to a voicemail message he has left for her, they have sex. Honey discovers that William's modelling contract has not been renewed and decides to move back to Walford. She then opens up to Les Coker, about not wanting to move too quickly in her relationship with Billy. Honey asks Billy to speak to Ronnie about loaning them some money so she can move into a flat nearby with Janet and William. After Billy reveals why he needs money from her, Ronnie suggests Honey and the children move in with her and her son, Matthew Mitchell Cotton, so that she is no longer alone. Honey agrees to this and they move in the following day. Honey and Billy soon get engaged again.

Honey is horrified to learn that Jay Brown, who lives with her and Billy, has been dealing drugs and that Billy knew this, evicting them both. She later forgives Billy and agrees to help Jay. Honey and Billy catch Jay stealing their wedding fund, so Honey reports Jay to the police and he decides to move out so that Janet and William will not go into care.

Honey comforts Jack Branning when his wife Ronnie and her sister Roxy Mitchell drown on Ronnie and Jack's wedding day. Billy and Honey move into the flat above the funeral parlour where Billy works, and he is made a partner in the business. Honey is devastated when Janet is hit by a car and after arguing with Billy, he has sex with Tina Carter, who was driving the car. Billy is sacked for illegally exhuming a grave, and Honey sees Billy and Tina hugging after she supports him. Honey assumes they are having an affair so Billy admits to a one-night stand. Billy and Honey split over it, leaving Billy homeless. Tina's plan for Billy to get Honey drunk, so they might get back together, backfires when she flirts with Jack instead, and when Honey nearly kisses Jack, he in turn is attacked by Billy, who then tells Honey that their relationship is special and he wants to get back together, but she vomits because of the alcohol. All attempts to reconcile fail, because she cannot forgive him for cheating on her. Honey struggles to pay her rent, so she, Janet and William move in to a house share with Billy. Billy cooks Honey a special dinner hoping it will start a reunion, but she cracks a tooth on an olive stone. She sees a dentist, Adam Bateman, which leads to series of dates. Billy is jealous and gives the children sweets because it is bad for their teeth, but it just leads to William vomiting on Honey. Billy later deletes messages from Adam on Honey's phone but she then changes her PIN, saying she will not let Billy spoil her time with Adam, and their relationship continues.

Adam began having an affair with Habiba Ahmed which Billy tried to warn her about but she put it down to Billy being jealous. Honey catches proof of their affair on the shop's CCTV, however she 'forgives' Adam and resumes their relationship. Honey then develops Bullimia after she is convinced that she is not pretty enough for Adam. However, it was the last straw when Honey discovers from Iqra Ahmed that Adam was getting involved with a woman called 'Sally' who Adam claimed was his secretary. Honey then shames Adam in front of everybody at The Vic and goes home to which Adam follows her and says that he's allowed to have a flirt once in a while and cruelly says that Honey's just as guilty for hiding her Bullimia from him. Honey then kicks Adam out which leads to Adam insulting her in the street whilst Iqra and her girlfriend Ash watch. Adam makes some nasty comments about Honey's Bullimia, leading to her whacking his face with a bin; Adam then calls Honey a crazy bitch to which Honey replies that Adam should go and find a dentist and walks off as Iqra and Ash cheers her. 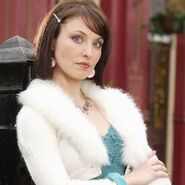 Janet Mitchell and Will Mitchell, Billy Mitchell and Honey Mitchell
(17 January 2020)
Add a photo to this gallery
Retrieved from "https://eastenders.fandom.com/wiki/Honey_Mitchell?oldid=201925"
Community content is available under CC-BY-SA unless otherwise noted.