Pearl Fox
Henry Hubbard is an unseen character, he has never appeared on screen.

Henry Hubbard was born in about 1948 and lived in Walford in the 1960s. He was friends with Ted Hills, Den Watts, Gavin Sullivan and Eric Mitchell. He has only ever been seen in a photo that Gavin had off them all together. Henry is the husband of Claudette and the father of Vincent Hubbard. Vincent was born in December 1973.

Vincent heard talk of Den Watts and said his dad knew him. Vincent said he hates Christmas as his dad died at Christmas.

Claudette begged Henry not to get involved with Eric Mitchell and his gang of mates. But Henry did not have any money, Vincent asked for a pair of trainers. Claudette told Vincent that they couldn't afford it.

On Christmas Eve 1981, Henry came back to his house all worked up. Vincent was in his Pyjamas listening on the stairs, Henry and Claudette were arguing about Eric not paying him for a job he did.

When Vincent woke up on Christmas Day he had one present under the tree, it was the High-top trainers he had asked for. Henry went to confronted Eric for not paying him and he was killed but his body was never found. There was a rumour that his body ended up in concrete on a construction site.

In an episode dated 9th March 2016, it is revealed Claudette killed Henry and her old friend Gavin knew and threatened to spill it. 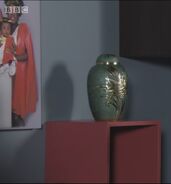 Henry Hubbard Urn at 1 Albert Square
Add a photo to this gallery
Retrieved from "https://eastenders.fandom.com/wiki/Henry_Hubbard?oldid=133508"
Community content is available under CC-BY-SA unless otherwise noted.