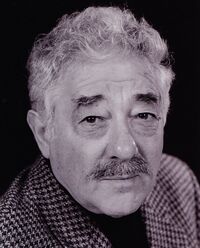 Harry Landis (born 25th November 1931 in Stepney) appeared as Felix Kawalski in EastEnders from November 1995 to May 1997.

He has over 100 credited roles in television shows. In 1964 he appeared in The Indian Tales of Rudyard Kipling as Private Stanley Ortheris. Two roles in the television series Crown Court firstly as Arnold Curl in 1973 and secondly as Victor Garniss in 1975 and 1976.

He played Abraham Kallinski in A Woman of Substance in 1985 and Solomon Einstein in Johnny and the Dead in 1995 before landing the role of Felix. After EastEnders he appeared in The Bill, Holby City, Friday Night Dinner and Doctors. His last known role in television was in Casualty as Joseph Rogerson in August 2018.

He was elected as President of Equity, the UK actors union, in July 2002.

Retrieved from "https://eastenders.fandom.com/wiki/Harry_Landis?oldid=149485"
Community content is available under CC-BY-SA unless otherwise noted.