Former; guest
Haroon Zaman made his first appearance on 7 November 2016. He is the manager of ELGE, a telesales centre where Lee Carter works. Haroon is portrayed by Silas Carson.

Haroon is Lee Carter's supervisor at the East London Gas and Electric call centre he is secretly working at. He is forced to break up a fight between Lee and his colleague Osman Bolat (Noah Maxwell-Clarke) and demands to see Lee in his office after his shift. Haroon discovers on social media that Lee was getting married on the day he called in sick the previous week, and docks him a day's wages for doing so. The following day, Haroon criticises Lee for being at the bottom of the sales table. He orders Lee to work with Oz for the day to learn from him. 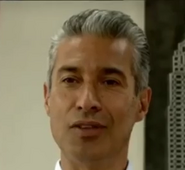 Haroon Zaman
Add a photo to this gallery
Retrieved from "https://eastenders.fandom.com/wiki/Haroon_Zaman?oldid=65105"
Community content is available under CC-BY-SA unless otherwise noted.