Died from pancreatic cancer after seeing a Swastika Flag

David Samuels
Dr. Harold Legg was the son of Gregory and Esther Legg, brother of Hester and Miriam and widower of Judith.

Dr Legg, the Square's Jewish doctor, was born in London on the 18th June 1920, his father being Gregory Legg, and his mother Esther Legg. Harold's grandparents were Jewish immigrants from Europe, who lived down Legg Street and anglicised their surname to Legg as a tribute to their street of residence. In his youth, and still later in life, he was good friends with Lou and Ethel.

During the Second World War he lived with his wife, Judith (who was also good friends with Lou and Ethel), although she was killed while hanging out washing, during an air-raid. Dr Legg went to medical school in the early 1940s where he met his wife. Dr Legg’s father gave him his medallion for his wedding day.

Dr Legg later moved to Islington, living there for several years, but continued to maintain his surgery in Albert Square, renting the flat upstairs to Ethel Skinner and the barman Lofty Holloway among an array of other tenants. As Walford's GP, Harold is forever getting called upon to treat the troubled residents, even when he is not on duty, including helping Sue Osman come to terms with the death of her son, and humouring hypochondriac Dot Cotton.

In 1988, Harold's sister, Hester Samuels, comes to Walford to visit and tells him that her son, David, is interested in joining him in Britain. As David is a doctor in Israel, Harold thinks it is a great idea and in April that year, David joins him in Walford and is made a partner in the practice. Harold even moves back to Walford and he and David live in the flat above the surgery. Despite being extremely fond of each other, the new partners argue about almost everything. David wants to modernize the surgery and bring in computers but Harold is set in his ways and is opposed to any obvious changes. Harold also disagrees with David's friendship with their secretary, Michelle Fowler, particularly when the two get drunk at a Christmas party, leave together and share the same bed. David awakes the next day not remembering a thing, but is reassured when Michelle informs him that he had been too drunk to do anything untoward anyway. Harold is not convinced however and berates David for the degradation he brought upon himself and the surgery. Later, David and Harold fall out over Harold's treatment of patients when he discovers that Colin Russell, is showing early symptoms of multiple sclerosis. He decides not to tell Colin as worrying about his condition could bring on another attack although Colin may not have another attack for 20 years or so, choosing instead to tell Colin that he is overworked and anemic. This highly unethical move appalls David but despite this, Harold continues to refuse to tell Colin about his illness. However, in January 1989, he finally tells Colin the truth. Colin is furious that Harold had kept this information from him and refuses to listen when he tries to explain his reasons. He threatens to report Dr Legg to the authorities and is mortified at how unethical he has been. Although Dr Legg is sorry, he stands by his decision to lie, feeling that Colin benefited from not knowing - when in fact, the opposite is true.

David later becomes incensed by his uncle's lack of persistence, concerning Donna Ludlow's heroin addiction and blames him for her death later in the year. Things reach a climax in May 1989 when Dr Legg fails to diagnose Vicki Fowler's meningitis and Vicki almost dies, consequently his practitioners no longer trust him and makes him question his abilities as a doctor, sending him into early retirement. This leaves the medical practice in the hands of his nephew but David's more modern methods prove unpopular with the older residents so Harold comes out of retirement. David tries to fight his decision but his Israeli girlfriend, Ruth makes him see how futile the arguing has become. David and Harold manage to sort out their differences before David returns to Israel in September that year.

Dr Legg's appears semi-regularly from this time, usually only when another character needs medical assistance or advice. However, he remains Walford's GP. He officially retires and leaves after February 1997 and is replaced with a younger, trendier doctor named Fred Fonseca.

He makes several brief appearances after this time however, attending Ethel's funeral in September 2000 and Mark Fowler's in April 2004. In June 2007, Dot visits him seeking advice. He sends wreaths to the funerals of Pauline Fowler in January 2007 and Frank Butcher in April 2008 but does not attend them. In December 2008, he telephones Dot with news of Janine Evans, now known as Judith Bernstein, and her upcoming wedding to an elderly Jewish man.

In October 2018, Dot experiences dizziness and she thinks she is dying despite the fact that two doctors tell her she is healthy. Dot then visits Dr Legg, who reassures her about her health. He goes to the Vic with Dot and tells her that he is dying of pancreatic cancer. Dr Legg asks Dot to help him plan his funeral, so they consult funeral director Jay Brown (Jamie Borthwick). Dr Legg mentions Judith's death in the war and tells Jay and Dot he wants to be buried next to her, but feels that his parents would want him to be buried next to them. Dr Legg then moves in with Dot.

Dr Legg and Dot visit his parents' grave but discover that their gravestone has been vandalised with antisemitic graffiti. Dr Legg and his Rabbi meet with the gang of youths who were responsible for the graffiti, they apologise. When Dr Legg returns home, he sees Stuart scrubbing a graffitied Swastika on the door. After this, Dr Legg goes into hospital as his cancer progresses.

On 15 February 2019, Sonia, who comes to bring Dr Legg home is shocked to hear him say that he does not want to return to Dot's house, however, he later changes his mind and returns though very frail. Later, Dot and Dr Legg watch a programme about the Battle of Cable Street in 1936. In his final moments, he tells Dot about how he met Judith at the anti-Fascist demonstration. He tells Dot about the first time he kissed her and says "And I kissed her. And she kissed me back. The most perfect kiss ever. What I would give...", before passing away. Dot tells Dr Legg to go kiss her again.

"All we've gotta do now is to arrange for you to have a test. I'll fix an appointment at the clinic." (First line)

"The most perfect kiss ever." (Last Line)

Dr. Legg tries to treat Sue Osman, who was in severe shock following the cot death of her baby (June 1985). 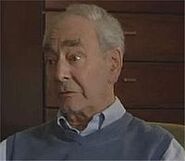 Harold in 2007
Add a photo to this gallery

Retrieved from "https://eastenders.fandom.com/wiki/Harold_Legg?oldid=199538"
Community content is available under CC-BY-SA unless otherwise noted.