Wellard
Gus Smith made his first appearance 28 May 2002. He is portrayed by Mohammed George.

Gus first arrives in Walford in May 2002, working for a bed company and meets Sonia Jackson. Gus falls in love with Sonia and they get together after she splits up with Jamie Mitchell. When she and Jamie realise they still have feelings for each other, she breaks up with Gus and reconciles with Jamie. In July, Gus is joined in Walford by his troublesome brother Juley Smith, taking over as local road sweeper, and is given Wellard the dog when his friend Robbie Jackson leaves London for India.

When friends Martin Fowler and Vicki Fowler break into the Minute Mart, Gus investigates, is caught by police and is left to take the blame. In December 2003, Gus goes on a trip to Scotland in a minibus with Zoe Slater, Kelly Taylor, Mickey Miller, Spencer Moon, Sonia, Martin, Vicki, Tariq Larousi and Ronny Ferreira and Kareena Ferreira. When the bus crashes on a moor, nearly killing Zoe, Gus and Wellard manage to find help for his stranded friends.

In 2004, Gus disposes of a handgun he found in Juley's bag. Juley's involvement in crime, including the theft of some charity money, leads to his departure from Walford in April 2005, though he returns in September for a trip to France with Gus, Mickey, Garry Hobbs and Minty Peterson. While in France, Gus meets Mickey's sister and father Dawn Swann and Mike Swann. Mike exposes Juley as a con man, despite Juley's claims that he is a reformed character. Gus persuades Juley to return to Walford permanently to turn over a new leaf.

In late 2005, Wellard bites Ian Beale, who decides he wants the dog put down. Wellard is imprisoned pending a trial, but is freed on 12 January 2006, after Ian's partner Jane Collins and children Peter Beale and Lucy Beale give character witness statements. When Juley mugs his ex-girlfriend, Ruby Allen, Jake Moon threatens to report Juley to the police. Gus helps Juley escape, despite being disgusted at Juley's actions, by stalling Jake and letting Juley out of the back door. Gus is briefly reunited with Sonia when she breaks up with girlfriend Naomi Julien, but she leaves him to reconcile with her husband Martin.

In April 2008, Gus meets and falls for a girl called Keisha but catches her in bed with Sean Slater, his lodger who is two months behind on his rent. Sean fools Keisha into thinking Gus is a womaniser. After announcing what Sean did to everyone in the pub, including Sean's girlfriend, Roxy Mitchell, Gus attempts to evict Sean but is kicked out himself. Sean threatens to kill him if he doesn't pay the rent, and keeps Wellard. Sean later claims to want to make amends with Gus, but tricks him into believing he has killed and eaten his dog. On 28 April he is tied to a chair and Sean is about to give him a beating when Sean's sister Stacey Slater walks through the door and stops him. Having been reunited with Keisha, Gus leaves on 1 May to travel with her band. However, he finally gets his revenge on Sean before leaving, by exposing him as a cocaine dealer. 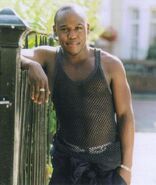