Graham Clark made his first appearance on the 16 June 1987. He is portrayed by Gary Webster.

Graham, grew up in Walford and went to school with Nick Cotton, Rod Norman and Darren Roberts. After getting involved in a criminal activity with Nick, Graham served time in prison, but it later transpires that Nick had committed the crime that he was imprisoned for. Graham never forgave Nick for allowing him to go to prison for his crime. Graham was very protective of his younger brother Barry.

Barry was afraid to admit to Graham that he was homosexual and in a relationship with Colin Russell. He tries to cover this up, but is relieved when Graham reveals he had known he is gay and accepted it. Graham marries a girl named Kate in 1987 after she becomes pregnant with his child. Graham is looking forward to the prospect of becoming a father and asks Barry to be Godfather. Kate miscarries weeks before the baby is due in November 1987. Graham and Barry are devastated.

Graham gets involved in the plight of Colin, who is targeted by the criminal organisation known as "The Firm". The Firm want Colin, who is doing jury service, to give a verdict of "not guilty" for one of their associates, and they use Den Watts to lean on him. Graham intervenes, he along with a gang of thugs and his pet Alsatian, Prince, confront Den and order him to stay away from Colin and Barry. Nick's father, Charlie Cotton, uses Graham's animosity towards Nick to get rid of his son. Nick had been hiding from Graham, but Charlie allows Graham into their house to confront him. Graham orders Nick to leave Walford or face the consequences. Nick flees for his own safety. Graham is last seen in January 1988, supporting Colin over his recent break-up with Barry. 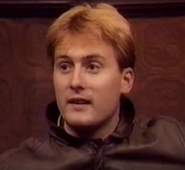 Graham Clark
Add a photo to this gallery
Retrieved from "https://eastenders.fandom.com/wiki/Graham_Clark?oldid=156528"
Community content is available under CC-BY-SA unless otherwise noted.