Grace Olubunmi made her first appearance 4 June 2010. She is portrayed by Jay Byrd and Ellen Thomas.

Grace is the grandmother of Mercy and Faith Olubunmi. She appears in episode 8 of E20 Series 1 in which she tells Mercy that her friend Fatboy is a bad influence on her. New executive producer Bryan Kirkwood introduces the character to EastEnders in his first episode on 4 June 2010, this time played by Ellen Thomas. She will also appear in series 3 of E20 along with Mercy's younger sister, Faith Olubunmi, who Grace sent to Nigeria to get back on the straight and narrow, but she returns to the UK and is worse than ever.

When the character arrives, she urges Mercy to tell Fatboy that they are moving to Lagos. She makes friends with Liz Turner and later tells Fatboy about their plans. She hosts a lunch at the community centre and tells Lucas_Johnson that she has grown fond of London but is going to Lagos for Mercy's sake. Fatboy then realises that neither Grace nor Mercy want to go and makes them realise this after Mercy has returned the key to their former home. Fatboy then says he has a plan for somewhere for them to live, and they move into a property onAlbert Square. Grace attends a bible class with Mercy, held by Lucas, although Lucas is later. She apologises for Mercy's behaviour when she continues to ask about false prophets and a passage that states that anyone who questions a priest should be put to death, causing Lucas to leave. Grace makes Mercy write Lucas a letter of apology, but Mercy bins it.

Upset with the amount of litter around the streets, she urges Mercy and Fatboy to volunteer to pick it up. She takes Mercy's friends Zsa Zsa Carter (Emer Kenny) and Leon Small (Sam Attwater) to get their GCSE results and says she used to be a teacher. The next month Leon breaks one of her commemorative plates and Fatboy tries to create a new one in the hope Grace will think it is real, but she does not fall for it. However, she praises Fatboy for his eventual honesty and displays the plate with her others.

However, when she discovers Mercy has been serving drinks in Alfie Moon's(Shane Richie) illegal den, she berates her granddaughter and says Fatboy has corrupted her. Grace overhears Dot Branning planning to collect jumble for her church. Grace collects the jumble instead, leaving Dot upset. They quote bible passages to each other to try to show who is in the right, but Grace later admits that she is lonely and just wanted to meet new people. The next day, Mercy tries to get Grace and Dot to make up, by suggesting Grace work in the launderette. Grace puts some shirts in a broken washing machine, which annoys Dot, and after Grace gets it open Dot is still not happy. Grace later gives Dot her CV to give to her boss, and Dot says there is not a job for her but Grace tells her that Jesus disagrees.

The next day, Grace asks Dot if she has looked at her CV yet. Dot says Grace is overqualified as she used to be a teacher. Grace says she will not be teaching again as she was dismissed from her last job. Later, Dot finds a tin of cakes in the launderette with a note from Grace saying it was not about the job. Dot visits Grace and offers her a few weeks work while Dot is away. Grace feels honoured, and tells Dot she was dismissed for slapping a pupil. Dot thanks her for her honesty. However, when Dot joins a local choir that Grace is a member of, the pair start quarrelling again, as Dot is unimpressed with the singing standard of the group. She later holidays in her native Nigeria but returns in time for the wedding of Prince William and Kate Middleton. She does not watch the wedding, however, as Mercy is leaving because she faces deportation. Grace and Mercy say goodbye to each other but as Mercy's taxi drives off, Fatboy stops it and asks Mercy to marry him. Grace is opposed to the idea at first, until she realises that Fatboy loves Mercy. 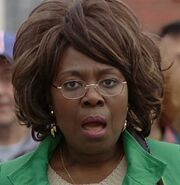 Grace Olubunmi (2011)
Add a photo to this gallery
Retrieved from "https://eastenders.fandom.com/wiki/Grace_Olubunmi?oldid=160694"
Community content is available under CC-BY-SA unless otherwise noted.