Former; regular
Frankie Pierre made her first appearance 18 June 1996. She is portrayed by Syan Blake.

Frankie first appears in June 1996 as a soul singer in a band with musician Mick McFarlane, who is her former boyfriend. Frankie’s band is hired to play at the Bridge Street Night Café, and Frankie is immediately attracted to café worker Alan Jackson. She openly flirts with him, unconcerned that he is already married to Carol Jackson. Frankie is intent on snaring Alan. She moves to Albert Square — sharing a house with Huw Edwards and Lenny Wallace — and gets a job as a waitress at the café, so she can be near Alan. She tries to persuade him that married life is making him unhappy, encouraging him to split from his wife to be with her. Alan resists her advances, so Frankie changes tactics. She targets Alan’s wife Carol, infuriating her with suggestive claims about the nature of her relationship with Alan. Carol is extremely jealous and many arguments erupt between her and Alan, which causes a rift in their relationship. When Alan confronts Frankie about her stirring, she breaks down claiming that she loves him, but it is all just a game to coax him away from Carol. Alan falls for Frankie’s lies, and after one row too many with his jealous wife, he has sex with Frankie, beginning an affair. Frankie is keen for Carol to find out so she plants her watch in Alan’s house, hoping that Carol will find it. When Alan discovers Frankie’s game playing, he attempts to finish with her, but she threatens to inform Carol about their affair unless he keeps on seeing her. Carol, realising her husband is cheating on her, tires of the deception. She turns to her former boyfriend David Wicks and they begin a short-lived affair. The truth finally comes out, both Alan and Carol confess to their affairs, but neither can forgive, and when Frankie invites Alan to live with her, he accepts, devastating his family.

However, Frankie’s feelings towards Alan change as soon as he moves in with her. She finishes with him days after he left his wife and family, claiming that their relationship has grown too intense. Stunned, Alan tries to change her mind, but Frankie has lost interest. It turns out that Frankie has a history of chasing attached men only to lose interest as soon as she has succeeded in breaking up their marriage. Her friend, Mick, claims that her deprived childhood and an inability to be loved are the cause of her promiscuous and devious behaviour.

Alan is sympathetic and willing to help Frankie through her psychological problems, but she has already set her sights on a new man, Tony Hills. Even though Tony is in a homosexual relationship with another man, Frankie seduces him, and after copious amounts of alcohol, they have sex together. Tony is desperate to keep their tryst a secret from his boyfriend, Simon Raymond. He tells Frankie that their night together was a mistake, however, Frankie will not accept rejection; she attempts to blackmail him into continuing their affair, threatening to out him as a homosexual, and tell his boyfriend what has occurred. Tony fears the repercussions, but he refuses to give Frankie what she wants, and she has further knockbacks from Sanjay Kapoor and her neighbour Ian Beale, who throws her out of his house after she propositions him, branding her a “scrubber” with “no class”. Feeling sorry for herself, Frankie seeks salvation from evangelist Alistair Matthews. She starts off by singing at one of his prayer groups, and Alistair takes a keen interest in her spiritual welfare. Frankie takes this the wrong way, assuming that Alistair is interested in her sexually. She tries to seduce him on numerous occasions, but Alistair rejects her each time. This bruises Frankie’s ego, and she starts spreading rumours that they had had sex together in an attempt to make Alan jealous. Alistair fears that his reputation is being tarnished. He confronts Frankie in The Queen Victoria public house, exposing her lies and humiliating her in front of everyone. Frankie turns to Alan for support, but he shuns her, finally realising what a liar she is. Incensed, Frankie turns violent and attempts to assault Alan, until her friend Mick shows up and dragged her away. Frankie moves away from Walford and Mick later mentions that she has quit their band. 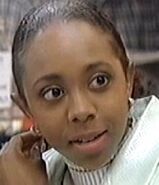 Frankie Pierre and Alan Jackson Kiss
Add a photo to this gallery
Retrieved from "https://eastenders.fandom.com/wiki/Frankie_Pierre?oldid=165223"
Community content is available under CC-BY-SA unless otherwise noted.