Moved to Spain, where he later died of throat cancer

Roly
Francis Aloysius "Frank" Butcher was the son of Chike and Mo Butcher, father of Ricky, Janine, Diane, Clare and Danny, and the grandfather of Liam, Natasha, Tiffany, Jacques and Scarlett.

1. Alan Hall (March 1994) (instigated): While he never killed the car lot vagrant, he played a part in his demise. He paid Phil to torch, and set fire the car lot, as part of an insurance claim. Phil finally relented and torched the car lot, naturally not expecting a vagrant to be asleep in one of the cars. Phil and Frank were very grief stricken.

Diamond geezer Frank Butcher was the iconic leading man of Albert Square, but for all his twinkly-eyed cockney charm some might say that he was little more than a second-rate con merchant.

His smooth-talking nature proved a hit with the ladies, and when the love-rat rolled into town to pick up the pieces with his teenage sweetheart Pat, he managed to break her cast-iron heart.

His hands-off attitude to parenting and frequent absences from Ricky and Janine's lives arguably led Janine on her attention-seeking, destructive path.

Domineering mother Mo tried to put him on the straight and narrow, but failed. And like Pat before her, poor Peggy Mitchell fell under the dodgy car dealer's spell. Frank won her heart, cheated on her and conned her out of a great deal of money, even faking his own death.

But there will only ever be one Frank Butcher. No matter what he did, neither Pat nor Peggy could stay angry at Frank for long (and after seeing the scene where he bewitched Pat in nothing but a dickie bow and a smile, we can see why).

Frank started out as a used-car salesman. He met Pat Harris (Pam St Clement) at Butlins in Clacton in 1958 and, despite being on holiday with his girlfriend June Simmonds, he was attracted to Pat. They had an affair but June became pregnant, so he married her and broke Pat's heart. Frank and Pat met up from time to time and on each occasion the affair was rekindled, but Frank wouldn't leave June, and Pat eventually married and had two children of her own. Frank and June had four children: Clare (Lucy Foxell/Caroline O'Neill) in 1959, Ricky (Sid Owen) in 1973, Diane (Sophie Lawrence) in 1974, and Janine (Rebecca Michael/Alexia Demetriou/Charlie Brooks) in 1983. June had one other pregnancy in 1972 that ended in miscarriage at 12 weeks. June died of cancer in 1987, leaving Frank widowed and their children motherless.

In September 1987, Frank contacts Pat and they meet in Greenwich. Frank wants to reignite their romance and asks her to be the mother of his children but she refuses. Frank propositions Pat again in January 1988. Pat is still resistant but when Frank reappears in March, he finally convinces her to reunite. They take over tenancy at The Queen Victoria public house soon afterwards, and the following year Frank also opens a car lot on the square. Frank and Pat marry in June 1989 in true cockney style with Pat becoming stepmother to Ricky, Diane, and 5-year-old Janine (Rebecca Michael), who hates her.

Troubled by family upsets, Frank is devastated in 1990 when his mother Mo (Edna Doré) develops dementia. Her deterioration is rapid. In a lucid moment, she writes Frank a letter asking him not to let her end up like her grandmother, who had gone senile, saying she would rather die than suffer the same fate. Frank is torn, but attempts to adhere to his mother's wish by almost smothering her with a pillow while she sleeps. However, he cannot go through with it and instead sends Mo to live with his sister Joan Garwood (Mary Miller) in Colchester. In 1992 Frank receives a huge tax demand, swiftly followed by a large VAT bill. This forces him to sell his B&B and the adjoining house and move his family into a small flat. Pat establishes her own cab firm, PatCabs, which starts making them some money. However, on Christmas Eve that year, Pat runs over and kills a teenage girl and is later sentenced to six months in prison. Frank struggles alone and the Butchers end 1993 in financial ruin. In desperation, Frank asks Phil Mitchell (Steve McFadden) to set fire to his car lot so he can claim on insurance in March 1994. The car lot catches fire as agreed, but unknown to Phil and Frank, a homeless man is sleeping in one of the cars and burns to death. Frank is arrested on suspicion of manslaughter, but is later released due to lack of evidence. However, doubts remain as to whether he conspired to defraud his insurance company and an investigation takes place. Frank tries covering his tracks by claiming his accounts have burnt but Pat gives the business's books to the investigating agent. The pressure becomes too much for Frank, who is suffering severe guilt over the death of the homeless man. He becomes so depressed and despondent, no one can get through to him. Unable to cope, Frank leaves Walford and his family without warning in April 1994, and does not contact them to say where he is.

With no news of Frank, Pat is forced to get on with her life. She begins a romance with another car dealer, Roy Evans (Tony Caunter), in 1995 and by November, they are living together. When Pat receives a letter from a psychiatric hospital saying Frank has recovered from a breakdown and wants to reunite, she tears up the letter. On Christmas Day 1995, Frank arrives unannounced and is furious to discover Pat is living with Roy. Frank declares he wants his house, business, and children back and refuses to leave Walford. Pat's son David Wicks (Michael French) contacts his lawyers and is relieved to discover Frank has no claim on the car lot; however, Ricky gives his share of the business to Frank who then threatens to sell Pat's house. Roy tries scaring Frank away via various underhanded tricks. In a moment of remorse, Frank threatens to confess his involvement in the arson attack to the police. Pat attempts to make him reconsider and this leads to them having sex. Pat regrets her actions but Frank takes great pleasure in telling Roy. Furious, Roy threatens to leave Pat; to stop him, she claims Frank is lying. She convinces Frank she doesn't love him; defeated, he leaves Walford in March 1996 and moves to Manchester.

He returns briefly in April 1997 for Ricky's wedding to Bianca Jackson (Patsy Palmer) and again in December to console Ricky following the loss of his child. On another visit in May 1998, he becomes attracted to landlady Peggy Mitchell (Barbara Windsor) and they soon begin a relationship. Peggy asks Frank to move in with her at The Vic and they soon announce their engagement. Roy remains jealous of Frank, believing Pat has feelings for her ex-husband. When Pat turns to Frank following an argument with Roy and is seen leaving his flat, Roy and Peggy believe Frank and Pat are having an affair. Peggy calls off her engagement and Roy speeds off in his car on a suicide bid but Frank manages to convince him that his relationship with Pat is now platonic. He and Roy bond, leading Frank to admit he got a young woman called Gemma pregnant after first moving to Manchester, and had a young son, Danny, who was born in 1995.

Peggy marries Frank in April 1999, despite opposition from her son Grant (Ross Kemp), who cannot forgive Frank for accidentally hitting and killing his wife Tiffany Mitchell (Martine McCutcheon) in a motor accident months earlier. Frank runs The Vic with Peggy but in 2000 he starts to realise he is unhappy as he still loves Pat. While the two couples holiday in Spain that summer, Pat and Frank have sex. Their affair continues for several months and they eventually decide to elope to Manchester. They are due to leave on Guy Fawkes Night but Pat has second thoughts. It is too late however, as Peggy has already got Frank's letter of confession. Peggy shames Frank and Pat by reading the letter aloud in public, ending by slapping both Frank and Pat and then ejecting Frank. When Frank leaves Walford, Pat chases after him, shouting his name, but he doesn't hear and drives away, leaving her sobbing in the rain.

In January 2002, Peggy receives news Frank has died in a car crash in Spain and travels there for his funeral, where she's stunned to see him in attendance. Several irate conversations reveal that Frank has faked his death to con expatriates in a property scam with his new girlfriend, Krystle (Rula Lenska). Krystle in turn cons Frank, running off with his money. Despite his past actions, Peggy takes pity and gives Frank money but turns down the opportunity of resuming a relationship with him.

In the special episode, "Perfectly Frank", Frank returns to England in 2003 where he has set up a seedy nightclub and a car valeting service in Somerset. Problems arise when Frank receives a visit from council officer, Mr Payne, telling him that they have rejected his license to open a lap dancing club. Later, Frank's assistant, Kevin, is sent a car to valet by the local gangster named Reg Priest and finds the body of Mr Payne in the boot. Frank and his club staff try to find a way to avoid the police asking questions and fall foul of Reg so they throw the body into the water over the side of the pier. However, it later emerges that Reg only knocked Mr Payne out when he turns up alive, having survived the pier fall. Terrified of another attack, Mr Payne agrees to approve Frank's license.

In December 2005, when Pat is due to give evidence at the trial of Janine (now played by Charlie Brooks), who has been wrongly accused of murdering Laura Beale (Hannah Waterman), Frank tries to get Pat to change her testimony. Pat and Frank have sex but she is angry when she realises Frank is using their relationship to manipulate her. Nevertheless, after some contemplation, Pat changes her testimony. She and Frank say an emotional farewell with Frank commenting that he will always love her. Frank tries to reunite with Janine outside the court but is saddened to discover she already fled without him and was only using him to secure her release.

On 31 March 2008, Diane and Ricky reveal that Frank has died at Diane's home in France of throat cancer. His body is brought to Walford to be cremated. Following the funeral, Frank's ashes are scattered in Albert Square's flowerbeds. A heartbroken Pat orders a commemorative plaque dedicated to Frank and has it mounted in Albert Square, it reads "Frank Butcher 1940-2008, Husband, Father, Pilchard".

Frank's first on-screen contact with Pat, a letter to her at The Vic (8 September 1987) 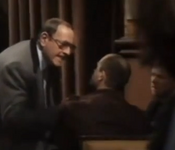 Frank has a row with Grant Mitchell in 1991 for Grant hitting Eddie Royle.

Frank and Tiffany circa 1997

Add a photo to this gallery
Retrieved from "https://eastenders.fandom.com/wiki/Frank_Butcher?oldid=221338"
Community content is available under CC-BY-SA unless otherwise noted.