Frank's club is under threat of closure by the council as they are trying to clean up the area. The councillor who tells Frank that his business won't be renews later changes his mind when he thinks that Frank has saved his life. 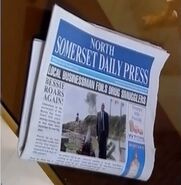 North Somerset Daily Press
Add a photo to this gallery
Retrieved from "https://eastenders.fandom.com/wiki/Frank%27s_Empire_Club?oldid=112052"
Community content is available under CC-BY-SA unless otherwise noted.