Hair Salon
Joinery (formerly)
Nightclub (formerly)
Restaurant (fomerly)
Finance Office (formerly)
Snooker Den (formerly)
2 Turpin Road has been the location of many businesses which have come and went. The location is currently occupied by Kim Fox, Denise Fox, and Mitch Baker. It is currently a unisex hair and beauty salon, Fox & Hair.

First referred to in late 1985, Henry's was a rival to the Queen Vic

Strokes Wine Bar was a wine bar occupied by The Firm in Turpin Road, used as a front for illegal gambling. It was involuntarily managed by Den Watts, due to his status as a well known publican; Gregory Mantel believed that his status in the community would draw away suspicion from any illegal goings-on at the bar.

Strokes opened in 1988, and was a threat to rival pubs The Queen Victoria and The Dagmar, which caused each business to hold special events to attract more customers than there rivals. In July 1988, Den was framed for the torching of The Dagmar, which led to him being sent to HM Prison Dickens Hill, and Joanne Francis took over his position at the wine bar. Following tensions grow and enrages The Firm's bosses, as it draws attention to the illegal gambling going on at Strokes.

In 1989, Joanne steals thousands of pounds of The Firm's money, leading to her doing a runner, Brad Williams tries to stop her in a speedy car chase but Joanne manages to ambush, and Strokes closed down soon after.

Following the closure of Strokes the lease was taken over by Mr Papadopolous who intended to convert it into an amusement arcade, with Julie Cooper running a hair salon in the basement. However, before this could happen the lease was bought out and converted into a pizzeria run by Steve Elliot. At auction James Willmott-Brown paided £71,000.

A loan company owned by Ian Beale. Ricky Butcher was employed as a debt collector/heavy. 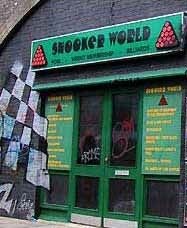 Snooker World was a snooker hall (and sports equipment supplier) was part of the Mitchell empire (co-owned with Annie Palmer), it was rarely mentioned in the show but is the place where Phil Mitchell sometimes meets his more shady friends. Billy Mitchell was previous the manager before it was burned down in 2004.

After a fire in 2004, the old Snooker World (2 Turpin Road) was knocked through with the nightclub Scarlet (4 Turpin Road), owned by Johnny Allen. He names it Scarlet after his daughter who died in a fire the previous year. Initial employees include Danny Moon, Jake Moon and Billy Mitchell. In 2006, Johnny decides to leave Albert Square.

Johnny's one-time fling, Amy takes over for a few months, but it proves unpopular for a young woman to be manager. Mike Swann also has a very brief spell as manager. In April 2006 after Johnny is imprisoned for murder, his young daughter Ruby Allen is given the club. Jake Moon is given the role of manager by Johnny and Grant Mitchell runs the club with him for several months. Jake and Grant both leave, leaving Ruby and her boyfriend Sean Slater running the club. Ruby tries to employ Wayne Thompson to work as a manager but after Sean gets angry at him he is not seen again. Ruby then leaves Walford for good and the future of the club remains uncertain.

Jack begins to use the club as a drinking den for his former friends and he even used it to deal drugs. this infuriated Ronnie's cousin Phil Mitchell who wanted Jack out of RnR and away from Walford. Ronnie and Jack eventually began a relationship. this forced Phil and Jack to make peace. Ronnie discovered Jack had been sleeping with her sister Roxy and offered to buy him out of RnR.

In 2009 RnR was suffering financial problems so Ronnie asked her cousin Billy Mitchell who had burned the club down once before to torch it again so that she could claim for insurance. there plan was uncovered by Jacks brother Max who offered to help Ronnie out at the club. Jack split up with his latest lover Tanya Branning and bought back his shares of the club. Ronnie sold her shares of the club to Jack and left Walford.

in 2010 Jack was gunned down in RnR by friends of his Nephew Billie Jackson and he was left fighting for his life in hospital. With Jack in a coma. Janine Butcher was determined to get her claws into RnR. Ronnie returned and offered to manage the club for the Branning's whilst Jack was recovering. she and Jack eventually resumed there relationship and Ronnie bought back her shares of RnR. Ronnie fell pregnant and was unable to cope with the strain of running RnR. her sister Roxy. who had become very rich following the death of her father. offered to buy Ronnie out. Jack later decided he wanted out of RnR because he wanted to spend time with Ronnie and his unborn baby. Phil Mitchell and Shirley Carter bought Jacks shares of RnR. Phil appointed Ronnie and Roxy's mother Glenda as the manager. When Janine Butcher eyes up the land that The Snooker Club once stood on, 2 Turpin Road & 4 Turpin Road are separated. Janine buys No. 2 and opens her Letting Agency business, Butcher's Joints.

Butcher's Joints was a letting agency and cleaning company owned and operated by Janine Butcher and Billy Mitchell (Managing Director). Butchers Joints was opened in late September October 2011 and was owned and operated by Janine, when she had her baby Michael Moon took over as Manager and Janine gets Post-Natal depression and later leaves the square closing down the office and emptying the accounts. She later returns in April 2013 and is determined to get Scarlett back so she Re-opens Butchers Joints and continues to run it with Billy she later hires Danny Pennant & Lucy Beale, In November 2013 she murders Michael and then decides to Liquidate assets in order to buy the Queen Vic from Phil Mitchell she is then later blackmailed by David Wicks and ends up getting arrested on Christmas day. Billy takes over running the company alongside Lucy & Danny, In February 2014 Janine decides to sell all her assets including Butchers Joints and closes down the company leaving the office empty.

Blades was a hair salon, run by Dean Wicks. The business was funded by Stan Carter and, initially, Dean wanted to call the business 'Stan's' after his grandfather; however, a kebab shop nearby had already taken the name, so Dean instead chose to name the business Blades. Blades ceased trading when Dean was imprisoned for his attempted rape on his fiancée, and former manager of Blades, Roxy.

Elysium was Belinda Peacock's beauty salon. It's name is Greek, and translates to a place or state of perfect happiness. Elysium had financial problems months after Belinda opened the salon; she wasn't able to pay staff and tried to save the salon from bankruptcy, but she eventually gave the salon up before leaving Walford. 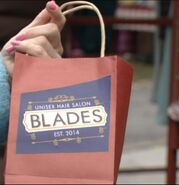 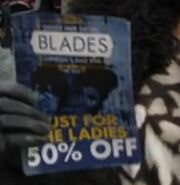 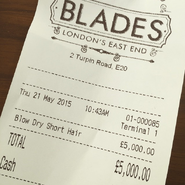 Blades Receipt, as seen on Matt Di Angelo's Instagram - the price tag is a joke. (2015)

Fox & Hair Voucher
(7 May 2019)
Add a photo to this gallery
Retrieved from "https://eastenders.fandom.com/wiki/Fox_%26_Hair?oldid=187246"
Community content is available under CC-BY-SA unless otherwise noted.