Gidea Thompson
Etta Tavernier made her first appearance 5 July 1990. She is portrayed by Jacqui Gordon-Lawrence.

Etta was born in Trinidad, Etta married Celestine Tavernier in Jamaica and after the birth of their first son in 1968 she joined Celestine in England, later having two more children. Etta decided to train for a job that she knew she could do well - teaching.

Etta and Celestine Tavernier and their three children, Clyde , the oldest, and twins Hattie and Lloyd , move to Albert Square along with Celestine's father Jules Tavernier, when they are rehoused by the council in 1990 after Etta acquires a new job teaching at Walford Primary School.

Celestine is put in an awkward position in 1990 when he discovers that Arthur Fowler is working and signing on for dole money at the same time. He eventually decides that he cannot 'turn a blind eye' to Arthur's fraudulent behaviour and turns him in to the authorities at his work, but his self-righteous attitude earns him few friends on the square.

Celestine is unwavering with his expectations of his offspring. He demands respect and adherence at all times, and because of this he finds it extremely difficult to relate to his children, who often feel that his strict rules are harsh and unfair. Celestine has a tempestuous relationship with Clyde in particular. Clyde feels that his father has 'sold out' by accepting the prejudices of his bosses who are slow to promote him, whilst Celestine cannot relate to Clyde's lack of ambition. He is also regularly accused of turning his back on his roots by his father Jules and because Jules never went through Celestine's struggles for acceptance in a white community, he doesn't really understand his son.

Celestine is a dedicated Church-goer and spends most of his spare time performing religious readings and educating 'young disciples' in the teachings of the Bible. Etta is also a devout Christian and a dedicated mother, but the big love of her life is teaching, so she is thrilled when she gets promoted to 'acting head' at Walford primary in 1991. However, Celestine blights what should have been a happy time for Etta by continuously arguing with her about her new job. Celestine, is unhappy about Etta's promotion as he feels threatened by her higher status and earning power and believes that she has deliberately set out to undermine his status as the head of the household. The rift between them nearly drives Celestine into the arms of another woman whom he had been mentoring in bible studies. The woman, Yvonne, wants more than friendship from Celestine and propositions him one night following a row with Etta. It is a testing time for Celstine, but the sanctity of marriage is more important to him and he manages to resist the temptation.

Their marriage is tested again later in 1991 when Etta decides that she wants to undergo sterilization in order not to pass on her Sickle-cell gene to any future children (their youngest son Lloyd has already inherited the gene and his life has been severely limited because of this). Celestine refuses to entertain the idea, however, as he feels that such an act goes against their religious principles. Etta decides to go ahead with the sterilisation anyway, only to discover that she is already pregnant and that her unborn child is carrying a double dose of the sickle-cell gene. Upon realising this Celestine is forced to reappraise his priorities and to agree, unwillingly, to a termination. It is a traumatic time for the Taverniers, but the ordeal eventually manages to bring them closer and they emerge from it a much stronger couple.

In 1992 Etta is offered a permanent role as head teacher at Walford primary and Celestine proves that he has learnt from his past mistakes by showing genuine happiness for Etta's success. However, in June of that year Celestine is offered a promotion in Norwich. Etta is unwilling to move but after Lloyd gets into trouble with the police for joy-riding, she decides that a fresh start for the family might be best. So the couple leave Walford for a new start.

Celestine returns briefly in July 1993 when he finds out that his daughter is planning on marrying Steve Elliot and is extremely shocked to find out that she is pregnant. Celestine is also shocked to meet his previously unknown of niece, Gidea Thompson, and he is appalled to find out that his father, Jules, had abandoned Gidea's grandmother - who at the time was pregnant with Gidea's mother - many years earlier.

Etta returns briefly in March 1994 to stop Steve (Hattie's ex-boyfriend) from attempting to contact her daughter and to tries to persuade her father-in-law, Jules, to come and live with them following his mugging. 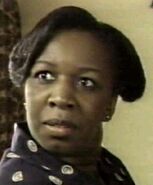 Etta Tavernier
Add a photo to this gallery

Retrieved from "https://eastenders.fandom.com/wiki/Etta_Tavernier?oldid=164846"
Community content is available under CC-BY-SA unless otherwise noted.