Willy
Ethel Skinner was a well-respected Albert Square resident for over fifteen years, and a close friend of Dot Branning and Lou Beale.

Pint-sized Ethel Skinner was to all appearances a real old dear, but she could be a trouble-maker when the mood took her. She spread the most insane rumours about all and sundry in the cabal of gossips that she formed with the formidable Lou Beale and Dorothy Cotton.

In spite of her age, Ethel was a good-time girl. She could high kick with the best of 'em, loved to tell a good yarn and claimed to have 'the gift' - telling fortunes, cards, tea leaves and palm readings.

Ethel Skinner was born on the 19th February 1919, the eldest of three children, in Camden Town, London. She grew up and remained most of her life on Albert Square after moving into the East End at the age of sixteen. During the second world war, whilst still living with her parents, she stormed out of the house one afternoon after arguing with her father about her wearing too much make-up, vowing to never set foot in the house again while he was still there. She came back the next day to find out that both of her parents had been killed by a German Doodlebug which had fallen on the house while she was away.​​​​Having lived through this bleak period of her life she began a downward descent into dressing in a provocative fashion and flirting with any man she deemed fit enough of her attention.

Ethel eventually fell into the arms of William Skinner and they tied the knot in 1945, whom she spent many happy years with. They could not have children. After his death, she acquired a pug and named him Willy after her late husband. Ethel had many lifelong friends, two of which were Lou Beale and Dot Branning.

Ethel lives above Dr Legg's surgery and works as the cleaner in the pub. She is somewhat of a troublemaker and often spreads the most insane rumours about and gets her words mixed up with hilarious consequences. She is famous for her questionable ability to read-palms and tea-leaves, once even earning a living from it. After Lou's death in 1988 Ethel and Dot become an inseparable double-act and although the two argue constantly, they actually depend on each other a great deal. Despite the fact that Ethel appears totally barmy, she can be quite astute when she wants and she is always the first to point out the malicious ways of Dot's villainous son, Nick Cotton. Ethel is never afraid to stand up to Nick, even kneeing him in the groin once when he attempts to mug her. She also correctly figures out that Nick is trying to poison Dot to get her money, and she refuses to back down, despite Dot falling out with her because of her accusations. Following several falls and a broken hip, Ethel is persuaded to move out of her residence above the surgery and into sheltered housing in 1988. Although she is strongly opposed to this initiative, she eventually comes to enjoy her new home, though she would continue to show up in Albert Square regularly.

Ethel has several romances with senior bachelors on Albert Square. Her ex-boyfriend from the war years, Ernie Mears, returns to Albert Square in 1985 and proposes to her. However, the offer is conditional. Ernie is allergic to dogs and Willy, Ethel's constant companion for the past 9 years, would have to go. Ethel seriously considers Ernie's offer but gently declines. In 1988 she finds romance again with a friend of Dr Legg's, Benny Bloom. Dot loathes Benny and does everything she can to talk Ethel out of dating him. Ethel and Benny discuss marriage, which Ethel agrees to, mainly to spite Dot, who calls her a silly fool for wanting to remarry at her time of life. However, after discovering pets aren't allowed in the manor where Benny lives, Ethel the engagement was called off, once again because of Willy. A few months later Ethel hears the news that Benny has died and has left her £2000, although his daughter tries to contest the will for a while.

In August 1989 Ethel meets a new love interest named Reggie Thompson. He invites her to go on a coach trip to Clacton for a dancing competition. Ethel is so excited that she shows Reggie a saucy nightie she has bought for the trip. When Dot, Marge Green and Mo Butcher find out about the trip, they decide to go as well. Reggie arranges dancing partners for them and the ladies practise hard at the community centre for months before the trip. But upon arriving on holiday, Ethel grows disappointed in Reggie when he starts to show interest in another woman named Gladys. On the night of the dancing competition, Ethel finds that Reggie has run off with Gladys and she has no partner in the grand ballroom except for her 'little Willy'. In 1992 Ethel's adored pug Willy succumbs to old-age and she has to make the heart-breaking decision to put him down. Regulars at The Queen Victoria pub raise money to buy Ethel a new dog, but she refuses to accept it, saying Willy is irreplaceable. By the mid-90s Ethel is seen much less frequently. She is seen occasionally, however, usually when a big event is occurring or to celebrate Christmas and New Year with her old friends on the Square. After 1997 Ethel is not seen in Walford for three years, although she is mentioned often, particularly by Dot, who will often visit her off-screen in her sheltered housing.

A very frail Ethel returns to Albert Square in 2000, arriving unannounced at Pauline Fowler's house. Ethel had run away from her retirement village and had decided that she was going to come back to the square, to live in the place she loves with her old friends. Ethel is now restricted to a wheelchair and it is left to Dot to cater for her every need, which often leaves her exhausted. Ethel appears to have lost none of her zest for life, despite her considerable age, so it is a huge shock to Dot when Ethel reveals that she is suffering from terminal cancer and is not going to live much longer.

Ethel reveals that she has come home to the square to die, but instead of waiting to die in agony, she wants to choose her final moments so she can die with dignity. She has been storing her morphine tablets for many weeks and it is her plan to take an overdose before the pain becomes too unbearable. However, before being able to execute her plan, she becomes too weak and is unable to administer the drugs without Dot's assistance. Dot is devastated and initially refuses to help Ethel, as to help another take their own life goes completely against her strict Christian principles. Dot spends many agonising weeks wrestling with her conscience, but she eventually agrees to grant her old friend's final wish. On the night of her 85th birthday (it was actually her 86th because she'd always lied about her age), after a celebratory party at The Vic, Ethel decides that this was to be her last night. After blowing out the candles of her birthday cake and bidding Dot an emotional farewell, Ethel takes the pills, aided by Dot, and dies peacefully in her sleep on the 7th September 2000.

After her husband William Skinner (a docker) died she got herself a dog (an adorable Pug) to replace him, naming him 'Willy.' Cue various inadvertent innuendo-laden references to 'My Willy'. Ethel and Willy were inseparable and she was heartbroken when he passed away in '92.

Aside from William and Willy, Dot was Ethel's soulmate. The pair were a fantastic double-act, alternating between petty tiffs and tricks and schemes. In fact, their friendship was so strong that Ethel asked for Dot's help in ending her life when she discovered that she had inoperable cancer. In what proved to be one of Walford's most heartbreaking moments, the pair celebrated Ethel's birthday before she passed away in the arms of the best friend she ever had.

The Residents of Walford

Ethel was a well-respected resident of Walford and Albert Square, she was a true East-Ender, an original East-Ender. Whenever someone needed advice or someone to talk to the old biddies Lou, Ethel and Dot were the people you turned too. Ethel's first strong hearted relationship, seen on screen, was with the shabby Lofty Holloway, he lived in the flat above her and in a way she took him under her a wing. A strong relationship, that lasted up until Ethel's move into the sheltered housing and Lofty's departure a few months after. Ethel also had strong relationships with other old residents of the Square including Marge Green, Mo Butcher, Jules Tavernier, Nellie Ellis and Blossom Jackson.

Ethel was a very spiritual woman, she believed in tea-leaves, palm-reading and fortune-telling. She convinced herself and everyone around that she had the gift. She would often hang around Bridge Street Market taking in customers for a palm read.

In her later years, Ethel grew a solid interest in gossip and intrigue around the Square occasionally getting the wrong end of the stick, and half the Square would know her version before the truth finally came out. Her best friend Dot was no stranger to this behaviour and they occasionally collaborated.

"You know who you are? You're the best friend I ever had." - (Final line, to Dot Cotton) 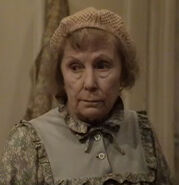 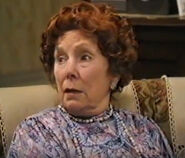 Retrieved from "https://eastenders.fandom.com/wiki/Ethel_Skinner?oldid=206484"
Community content is available under CC-BY-SA unless otherwise noted.