The future of Abi and Jay's relationship is in question as they both keep secrets from each other.

Under pressure, a tense Linda struggles to keep things together.

Stressed Ian receives a lifeline, but his joy is short-lived.

When Abi gets her exam results, she informs Jay that she got into the University of Liverpool. Jay is concerned about the news, but overcompensates by arranging a gathering at Abi's place to celebrate. Lola can sense Jay's unease but reminds him that this is what Abi wants. However, it later becomes apparent that Jay's tension is not only related to Abi…

Later at the party, Abi appears tense and takes Jay aside to confess something. Soon afterwards, the mood at the celebration worsens when Fatboy turns on the latest news update about Lucy's murder, which causes Lauren to leave and run into Dean. He invites Lauren to join him for a takeaway.

Meanwhile, Linda receives roses at The Vic and hides them from Mick, assuming that they're from Dean. Later, Sharon arrives at the pub and apologises for Phil's aggressive outburst the night before. As the day continues and Linda attends the latest Fat Blasters class, Cora gives her a hard time about Mick. Linda tries to ignore her taunts but finally reacts when Cora goes too far…

Elsewhere, Emma assures Ian that the press conference has reignited the case. Ian tries to get in contact with Phil for further help, but Phil has headed off to find Rainie and sort the problem out for good…

Also today, Max is upset when it seems that Emma is giving him the brush-off. 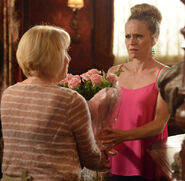 Retrieved from "https://eastenders.fandom.com/wiki/Episode_4908_(15_August_2014)?oldid=103989"
Community content is available under CC-BY-SA unless otherwise noted.