Cora comes face-to-face with a blast from the past but how will she react?

Linda is distraught when a former ally makes a damning revelation.

Financial concerns are cast aside as Kat and Alfie's lives are changed forever.

At the hospital, Stacey is taken away as Kat goes into labour.

Soon afterwards, Alfie, Mo, Tommy and Lily descend on the hospital for the twins' impending arrival. Do the Moons have a happy future ahead as Kat gives birth to two baby boys?

Meanwhile, Cora is shocked to see Rainie and soon realises that she was the prostitute involved in Mick's arrest. However, Rainie wants nothing to do with Cora and they soon go their separate ways again. Later at the pub, Cora isn't impressed by Mick's 'doting family man' attitude and rants at him in front of the packed pub - announcing his arrest to the locals…

Elsewhere, when Dean sees Linda, he can sense that something is wrong and follows her upstairs at the pub. Dean attempts to comfort Linda but she dismisses him. Back downstairs, Lauren is hoping to 'casually' bump into Dean and her plan works when he buys her a drink.

Also today, Peter and Denise are worried about Ian's lack of focus. They assume it's because of the upcoming TV appeal, not realising that it's actually because of the drama with Rainie. 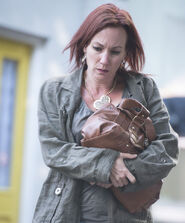 This episode is available to buy from the selected retailers below.

Retrieved from "https://eastenders.fandom.com/wiki/Episode_4904_(8_August_2014)?oldid=136598"
Community content is available under CC-BY-SA unless otherwise noted.