The residents of Albert Square celebrate the 50th anniversary of VE Day on Bank Holiday. Arthur intends to make sure it is a day for everybody, young and old alike, to remember. The market traders enter into the spirit of the occasion but, for Dr Legg and Ethel, it is a time to reminisce about old friends, family and neighbours in Walford during the War years. Meanwhile, Peggy discusses her future with "her boys", Ricky feels lonely and Nigel's day does not go to plan.

VE day, there's a street party, Ian sells chips for 2p a bag, etc. Gita has bought a load of second-hand 40's clothes, including some seamed "nylons". Cindy comes by to look, and Gita mentions them, but Sanjay says they've all sold out. David Wicks is passing and says he knows just what to do, and borrows an eyeliner pencil and draws seams up the back of Cindy's stockings. They all have a giggle. David has to sit next to Carol, as clueless Nigel did the seating plan. Kathy is a bit disappointed that Phil wouldn't come but he's far to busy with a bit of business. Ricky gets drunk and decides to write to Sam.

Everyone gets drunk and has hangovers next day, when there's a football match. Nigel goes into the Vic at lunchtime and tells Grant that the players aren't allowed to drink, as it's the semi-finals and very important, and as Bill Shankley said, it's not a matter of life or death, football's much more important than that. Most people drink orange juice when he goes in later, with their pints hidden under the table.

The bed-sit has a manager to collect rent, and he goes round collecting the newly increased rent. Della and Binnie are annoyed and Della says that they won't be able to afford their holiday before going to work in Ibiza, but Binnie says oh forget it, we'll just put him off and do a runner, it's only next week. Ricky gets a knock on the door for his rent arrears, and the news that it's going up again, to £70 a week. He is cross and goes to the salon to ask Della what they're doing about it. They says they're doing a runner, so he's on his own. He moans to Phil about it, and Phil very oddly says well, come round to my house this evening and we'll think of something for you to do. Ricky is surprised, says that there's football so he may be late. Phil says he and Kathy aren't going anywhere.

Arthur laughs at the football teams saying they will be slaughtered by the team they're playing. Steve rather optimistically with the power of captain having gone to his head, says no way, wanna bet? Arthur says You'll see. Sanjay backs Steve up and says rubbish, if you think that, put your money where your mouth is, I bet you a fiver we win. Arthur says you're on, and Steve and Big Ron also have the same bet. Mark hears and says hang on, you can't afford that, Dad, don't be an idiot, you haven't got that sort of money to gamble. Arthur says it's OK they will be paying.

Debs has to work the bank holiday on the betting shop. The owner is being really creepy and extremely nosy about Nigel and her in a "caring" sort of way. But he won't let her go early to the party which Nigel was really looking forward to being at.

Dr Legg and Ethel reminisce about dead people mostly. Bianca and Tiffany turn up in period costume, in old fur coats and hats. Grant goes to some para reunion and gets drunk. 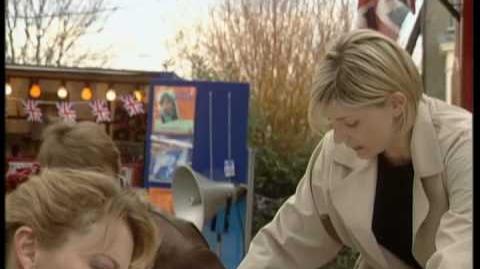 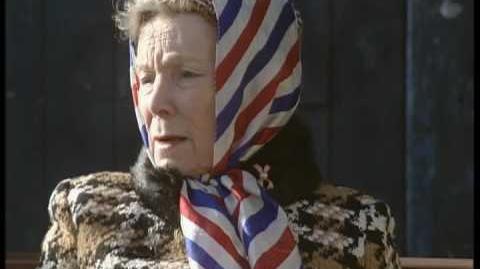 This episode was shown at 7:30pm

Retrieved from "https://eastenders.fandom.com/wiki/Episode_1128_(8_May_1995)?oldid=150256"
Community content is available under CC-BY-SA unless otherwise noted.