The original tune sounded quite different, the theme was created by accident by pressing the wrong piano key. After the BBC commissioned Simon to the music it only took him one hour to write the theme in full and was he paid £100. Although Simon wrote the EastEnders theme he had to shared half the royalties with Leslie Osborne.

He created a short version and a long version of the theme, the longer version was used for the EastEnders Omnibus version.

It really annoys Simon when the end title is playing and the music is spoken over by the continuity announcer. As Well as the theme he also is responsible for creating the Duff Duffs' music.

In 1999 Simon May donated the theme's musical score to charity but forgot he had done so, believing it had been misplaced. In January 2020, he was contacted by a Derbyshire auction firm when it resurfaced during a house clearance. Mr May bid against soap fans to buy back the music sheet for £460. The Music sheet was advertised with an estimate of between £70 and £100.

Mr May, from Guildford in Surrey, said: "It was really exciting to bid at auction. I'd never done it before. I booked a phone line to ensure I didn't missout. "I'm surprised the price went so high but I suppose there are a lot of EastEnders fans out there. "I'm really pleased to get it back. It was an important extract from the E8 musical manuscript. "Now it can be returned to my family archives. I'd realised it was missing but I thought I'd lost it. It's part of my family history."

Simon May interviewed by Bill Huntly

Simon May - The Man Behind The 'Duff Duffs' 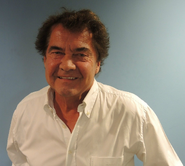 Simon May BBC Interview by Graham Norton
Add a photo to this gallery
Retrieved from "https://eastenders.fandom.com/wiki/EastEnders_Theme?oldid=194716"
Community content is available under CC-BY-SA unless otherwise noted.