EastEnders Wiki is a community created on the 18 December 2006 by the fans, for the fans, and is dedicated to housing a useful and informative database for all subject matter related to the BBC Soap EastEnders and its spinoff series E20. Our goal is to collaborate with other fans in order to build a reliable, accurate resource with as much detailed information about episodes, characters, and story elements as possible. If you are a fan of either series - or both - or if you are simply interested in them, this is the place for you! All are welcome to join in and contribute here, so long as edits are constructive, discussions are positive, and both are relevant to these series. Hope to see you around!

We are currently editing over 11,961 articles, and you can help
Please the time to read 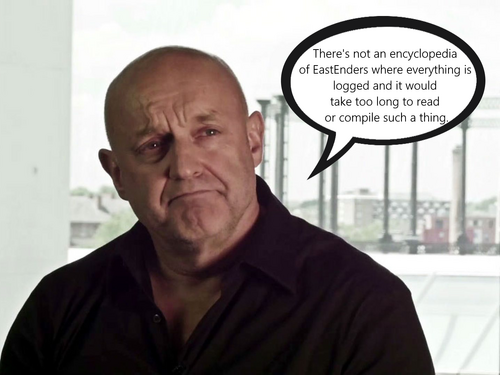 This week in EastEnders
3-9 May

Retrieved from "https://eastenders.fandom.com/wiki/EastEndersWiki?oldid=191589"
Community content is available under CC-BY-SA unless otherwise noted.