Died from an heroin overdose after being rejected by her mother

At the age of 14, Kathy was bundled into a car and raped, resulting in her falling pregnant. Unable to cope with a child conceived in horrific circumstances, she gave the baby up for adoption. Mr and Mrs Ludlow adopted Donna.

Donna's godmother, June Watkins, visits Donna's mother, Kathy Beale, who gave Donna up for adoption because she was raped at the age of 14 by a man called Marcus Duffy. Donna hopes to meet Kathy and June tells Kathy this and about her life. Kathy refuses but will not say why. Undeterred, Donna moves to Walford to be near her mother. For the first year she keeps her identity a secret and works as a barmaid at The Queen Victoria pub and takes to anonymously calling the Samaritans, where Kathy volunteers, but Kathy starts to suspect the caller's identity. Kathy becomes more concerned when Donna shows interest in her son Ian Beale, and Ian seems to be attracted to her, unaware that she is his half-sister. When Kathy tells Donna to stay away from Ian, Donna finally tells her who she is. Mortified, Kathy orders Donna to leave, telling her she gave her away and wants nothing to do with her.

Hurt by such rejection, Donna retaliates by causing as much trouble for Kathy as she can. She continues to flirt with Ian, forcing Kathy to tell him who she is, and hints to Kathy's husband, Pete Beale, that Kathy might be having an affair with James Wilmott-Brown. Finally Kathy tells Donna that the reason she gave her up was because she was the product of rape. Unhinged by this bombshell, Donna goes into a downward spiral. She stalks Simon Wicks, who only uses her for sex, and when he pits her against his new fling, Cindy Williams, the subsequent fights mean she loses her job at the pub; by August 1988, she is homeless. Michelle Fowler and Sharon Watts take pity and allow her to stay with them but after Donna tries to come between them, they throw her out. By September, she is living in an abandoned squat on the Square. After Donna's manipulations are discovered, the community shuns her. Depressed, she starts using heroin and is soon addicted and stealing to fund her habit; by December 1988, she turns to extortion. One day, Ali Osman comes into the Vic to celebrate his win at the horses. His boasting attracts Donna's attention and she takes advantage of his inebriation to seduce him and threatens to tell his wife Sue about the one-night stand unless he pays her regularly. But by February 1989, that well runs so dry that Donna resorts to prostitution, agreeing to sleep with her drug-dealer, Spike Murphy, in exchange for smack. Spike brings his sleazy friends along and a vicious gang rape is only stopped by Rod Norman's chance appearance. Following this, Rod tries unsuccessfully to get Donna off heroin.

When Donna tells the community that her adoptive parents have been killed in a car crash, the residents of Walford take pity, donating money to help her but are incensed when her mother arrives shortly after. Dot Cotton takes her in but everyone else shuns Donna; she promptly spreads rumours that Colin Russell has AIDS and tells Sue Osman about her affair with Ali, destroying their marriage. These are hollow victories, and after Rod abandons her to go on tour, Ali attacks her, and Kathy rejects her yet again, Donna overdoses on heroin and chokes to death on her own vomit. Dot finds her body on the living room floor a couple of hours later.

In July 2019, 30 years after her death, Kathy mentions to Rainie Branning that she had a daughter who was an addict. She tells Rainie that she died and that she was not there for her when she should have been and that perhaps things would have been different if she was. 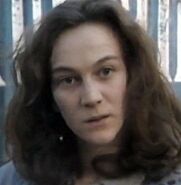 Donna Ludlow, dead. She took a large dose of Heroin and choked to death on vomit.

Donna Ludlow
Add a photo to this gallery
Retrieved from "https://eastenders.fandom.com/wiki/Donna_Ludlow?oldid=205769"
Community content is available under CC-BY-SA unless otherwise noted.