Dimensions in Time was a charity special crossover between the British science fiction television series Doctor Who and the soap opera EastEnders that ran in two parts on 26 and 27 November 1993. It was filmed on location at Greenwich and the EastEnders Albert Square set, situated at Elstree Studios in Borehamwood, Hertfordshire. It features several of the EastEnders stars of the time.

Two alternate sequences were filmed for Part Two, one with Mandy and the other with Big Ron. A viewer's' phone poll chose the Mandy version to be broadcast.

Produced for the Children in Need charity, following Doctor Who's hiatus in 1989,this special was the only dramatisation broadcast in celebration of the show's 30th anniversary.

The Rani has opened a hole in time, allowing her access to the Doctor's timeline. She uses this to cycle through the Doctor's lives, causing him and his companions to jump back and forth between past and present incarnations. Her intention is to capture all of the Doctor's selves in a time loop, trapping him in London's East End; she has already captured the First and Second Doctor in the time hole. This causes the Fourth Doctor to send a message to his remaining selves, warning them of the Rani's plan:

Mayday! Mayday! This is an urgent message for all the Doctors. It's vitally important that you listen carefully to me for once. Our whole existence is being threatened by a renegade Time Lord known only as the Rani! She hates me. She even hates children! Two of my earlier selves have already been snared in her vicious trap. The grumpy one and the flautist, do you remember? She wants to put us out of action, lock us away in a dreary backwater of London's East End, trapped in a time-loop in perpetuity. Her evil is all around us! I can hear the heart beat of a killer. She's out there somewhere. We must be on our guard and we must stop her before she destroys all of my other selves! Oh... Good luck, my dears!

The Seventh Doctor and Ace are confused when the TARDIS lands in Greenwich, near the Cutty Sark, thanks to the Rani's attack on the TARDIS. The Doctor finds a newspaper showing the year to be 1973, but before he can make any more conclusions, the Rani causes time to jump. Ace finds herself in Albert Square in 1993 with the Sixth Doctor. Local resident Sanjay tries to sell Ace some new clothes from his stall, and when his wife Gita tells the Sixth Doctor that it is going to be all the rage in 1994, the Rani jumps time again.

The Third Doctor and Mel Bush appear from the time jump, and question an old Pauline Fowler and Kathy Beale on when they are. When Pauline and Kathy reply that it is 2013, another time jump occurs. In 1973, Pauline and Kathy remember the assassination of President Kennedy, while Kathy tells off a young Ian Beale. The Sixth Doctor and Susan Foreman appear, but Susan wonders what has happened to 'her' Doctor, the First.

After another time jump to 2013, Susan changes into Sarah Jane Smith and the Doctor changes from the Sixth to the Third Doctor. They start to piece together what is happening to them, but the Rani lets loose her menagerie of specimens, including a Cyberman, Fifi (from The Happiness Patrol), a Sea Devil, an Ogron and a Time Lord from Gallifrey in the next time jump. In 1993, the Fifth Doctor, Nyssa and Peri are attacked by the Rani's menagerie, and after they tried to warn Pat Butcher of the danger, the Rani stops them outside the Queen Vic.

In 1993, after the Fifth Doctor changed to the Third Doctor in the next time jump, with Liz Shaw, the Rani took control of Liz's mind. As Mandy Salter tries to stop the Rani, Captain Mike Yates of UNIT comes in Bessie to save the Third Doctor and get him to The Brigadier who is waiting for them.

After another time jump, the Doctor changed to the Sixth Doctor and after he says goodbye to the Brigadier time jumps again. In 1993, at the Arches, Phil and Grant Mitchell find Romana looking for the Doctor, but they point her to Dr Legg. As Romana walks past the Queen Vic, the Rani captures her, in front of Frank Butcher.

Back in 1973, the Third Doctor explains to Victoria Waterfield who the Rani was and thinks that her control is breaking down, as they return to the TARDIS.

After the Seventh Doctor lands the TARDIS in 1993, Leela escapes from the Rani, after being cloned in the form of Romana. This results in an additional Time Lord brain imprint being left on the computer inside the Rani's TARDIS instead of the human one she needed, which gives the Seventh Doctor, Ace, and K9 the edge needed to rig up a device to overload it, sending the Rani into the time tunnel where she had trapped the First and Second Doctors and freeing the Doctors' other selves from the loop. As the Seventh Doctor and Ace leave in the TARDIS, the Doctor observes "Certainly, I — I mean, we — are difficult to get rid of." 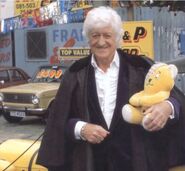 Pat Butcher with Pudsey and various Doctor Who monsters 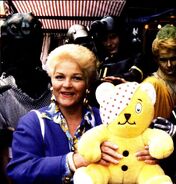 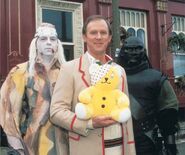 Mawdryn mutant and The Fifth Doctor 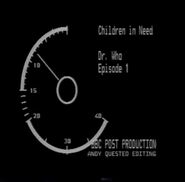 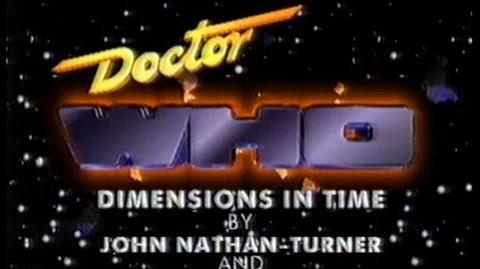 Doctor Who Dimensions In Time - 1993 Children In Need

Doctor Who - Dimensions In Time - Out-takes, Behind the Scenes, and Alternate Takes

Doctor Who Oddity Dimensions in Time Documentary
Community content is available under CC-BY-SA unless otherwise noted.