Diane arrives in Albert Square in 1988 as the daughter of second-hand car salesman Frank Butcher and sister to Ricky Butcher. Her mother June died in 1987, and when her father remarries Pat Wicks and takes over as landlord of the Queen Victoria public house, she lives with them there. Later the family move out of the pub to run a bed and breakfast elsewhere on the Square.

Problematic and strong-willed, she falls for the Butchers' lodger Paul Priestly in 1989, much to Frank's annoyance. Diane takes the relationship more seriously than Paul, and she is devastated when he finishes with her to begin a fling with hairdreser Julie Cooper. Paul and Julie do not last, and he immediately returns to Diane. Scorned, Diane cannot forgive Julie for taking Paul, and she plays various vengeful tricks on her as payback, such as sabotaging her salon's opening day and sending her a male escort to make her look desperate. Julie responds by flirting with Paul to infuriate Diane further, and their feud culminates in a showdown in The Queen Vic one night, at which Julie humiliates Diane. Paul quickly loses interest in Diane. Ignoring his reticence, Diane convinces herself that Paul is contemplating proposing marriage to her, so she is broken-hearted when he returns to his hometown in Leeds in December 1989; he leaves without saying goodbye.

Feeling misunderstood and unloved after believing that her family have forgotten her 16th birthday, Diane runs away from home in January 1990 and joins the down-and-outs on the streets of London. She is sinking fast when street-wise teenager Disa O'Brien takes her under her wing, showing her how to survive. Disa turns to prostitution for extra money, and Diane poses nude for photographs for a man named Matthew Taylor, who makes a sculpture of her. Diane also befriends Max Branning lookalike Jackson. She eventually returns to Albert Square in March 1990, after her father has been searching for months, but she struggles to adjust to life back in Walford. As a result of her time away, Diane develops an interest in art. When Taylor turns up trying to woo Diane, he deposits a life-size sculpute of her in Albert Square. Livid, Frank smashes up the statue and confronts Taylor, further alienating Diane.

Diane develops a friendship with Mark Fowler when he returns to his family home in 1990, and enlists his help to find Disa, who is heavily pregnant and living in "Cardboard City". Disa refuses their help initially; after she gives birth, she abandons the child on Diane's doorstep on Christmas Day. Diane and Mark care for the baby in secret until they find Disa and persuade her to come home with them. Diane takes care of them and attempts to help Disa bond with her child.

Diane is keen for her relationship with Mark to progress, so his hesitance upsets her. Eventually he confesses that he is HIV-positive. She pledges to stick with him although the task is daunting. She acts as a confidante, helping him to face up to his illness and seek counselling and professional help. Diane is unsettled when Mark begins spending time with his HIV+ ex-girlfriend Gill Fowler, and when Mark proposes to Diane in June 1991, she gently turns him down. The following month she leaves Walford to go on a fruit-picking holiday in France. She telephones Frank in September to say she will not be returning.

Frank visits Diane in France in 1993. He is horrified to discover she is pregnant and unsure who the father is. After a heated argument Frank storms off, refusing to speak to Diane, but they manage to make peace by the time Frank leaves—Diane drives to the ferry and tearfully waves Frank goodbye. Diane returns for a short stint in 1994 to inform Pat that Frank is alive and well and has merely run away from Walford following a mental breakdown—Frank had visited Diane off-screen in France.

Ricky visits Diane in France in 1997, spending time with her young son Jacques. Diane is in a tempestuous relationship with a Cameroonian musician named Thomas, and when this abruptly ends, she and son Jacques turn up in Walford, looking for a place to stay. However a short time later, Thomas visits Diane and asks her to go travelling with him on tour in Africa. Diane goes without informing anyone, leaving Jacques with Ricky and his wife Bianca Butcher. Pregnant Bianca struggles to care for troublesome Jacques, and even considers having an abortion as a result. Jacques is sent to live in Manchester with Diane's sister Clare, until Diane retrieves him to live with her in Paris.

In 2008, Frank dies of cancer at Diane's home in Paris, requesting that his funeral be in Walford. Diane returns on 31 March 2008 with Ricky, where they convey the news of Frank's death to his former wives Pat and Peggy Mitchell. The following day, Diane is glad to see her sister Janine back for Frank's funeral. During a conversation with Janine, Diane reveals she has been in a relationship with a woman called Suzanne for three years. At Frank's wake in the Queen Vic, Diane is approached by Ian Beale to speak about her experience of running away as a teenager, believing her insight might help him find his own missing daughter, Lucy Beale. Frank leaves individual gifts to each of his children. Diane receives some of her old school paintings and drawings. Diane helps Ricky, Janine, and Pat scatter Frank's ashes in the flowerbeds of the Square before departing.

Four years later, Diane returns to Walford to attend Janine's wedding to Michael Moon. She comforts Janine when Michael is questioned over allegations of fraud before arranging a hen party for her that evening. It is mentioned that Diane is still with Suzanne. She later acts as Janine's maid of honour at her wedding and escorts her to hospital after she goes into premature labour. The day after the birth of her niece Scarlett, she helps the initially-reluctant Janine produce her first breast milk.

Diane stays for a week after Scarlett's birth until Janine tells her and Ricky that they should return to their own lives. Diane agrees and tells Ricky that she cannot leave Jacques on his own. Diane stays for Scarlett's christening at the hospital then returns to France. Following Michael's murder and Janine's arrest in late 2013, Diane becomes Scarlett's guardian. 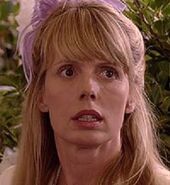 Diane Butcher - Name Card
Add a photo to this gallery

Retrieved from "https://eastenders.fandom.com/wiki/Diane_Butcher?oldid=207056"
Community content is available under CC-BY-SA unless otherwise noted.