Nancy Carter
Dean Wicks made his first appearance on the 2nd January 2006 and he the son of Shirley Carter and Buster Briggs, the adoptive son of Kevin Wicks and the father of Jade Wicks.

Dean Wicks is a dark, brooding man with a chip on his shoulder and an axe to grind... But underneath is a lost little boy who craves the love of his family...

Dean is a charming, sexy scoundrel, who’s angry with the world and his place in it. He’s not academic, but savvy and street-smart. He grew up on the wrong side of the tracks, but has managed to turn his life around.

As Dean returns to the Carter clan, will he be able to mend his bad-boy ways and get his relationship with Shirley back on track?

Dean came to Walford looking for his 'great auntie Pat Evans', whom he hadn't seen since he was a baby. Dean, a typical Wicks charmer, has already lost a potential friendship with Bradley Branning and a budding friendship with Stacey Slater, when he spiked the latter's drink and the former nearly went down for it. Deano has also landed Patrick Trueman in it by hooking him up with 'Dalton' Annie Tyler and a dodgy unsaleable motor, and nearly went down for spiking Stacey Slater's drink. He recently convinced his father that Pat was after him, prompting the relocation of the Wicks family to a hired flat. Dean is now competing with Darren Miller for Kevin Wicks's attention at the car lot.

Dean always had a naughty side; spiking Stacey’s drink, stealing the sacred Queen Victoria bust and going on various joy rides. Unlucky in love, Dean had a one-night stand with Stacey Slater, and unrequited crushes on Dawn and Chelsea. Chelsea unfortunately used Dean to help her set up Sean Slater for assault. This led to him enduring a 6 month stint in prison. When he was released he was emotionally scarred, and a changed man. He rejected Shirley’s request to rebuild their mother-son relationship and fled Walford, but not before giving Shirley some home truths.

In April 2014, Dean is seen watching his mother, Shirley, as she clears some glasses from outside the Vic. Dean then visits his grandfather, Stan Carter, as he is in trouble from handling stolen mobile phones. The police arrive, but Dean flees out of the kitchen window, leaving Stan to deal with the police. After his relationship with Shirley thaws a little, Stan calls Dean, who later arrives at The Queen Victoria pub. He introduces himself to the Carter family, but refuses to acknowledge Shirley. Stan encourages Dean to talk to her, but, when he does, he verbally attacks her for all the mistakes she has made, leading to Shirley's brother, Mick Carter, punching him. Shirley and Stan beg Dean to stay, but he angrily storms out. A week later though, Dean agrees to speak to Shirley, and they begin to bond. Dean also reveals to Shirley that he is currently working in a barber's shop, but does not like the way his boss treats him. Stan then offers Dean the money to buy his own salon on Albert Square. He agrees to this, and briefly moves in with his aunt, Tina Carter, before moving into the flat above his posh, new salon. After a few days of bonding with Shirley, Dean comes up with a plan to pack everything up from the salon, and decides that he wants to move to Lanzarote. However, Stan realizes what he is up to, and tells him that he should not ruin his relationship with Shirley again. He listens to this, and joyfully resumes his business.

Dean and his grandfather Stan Carter 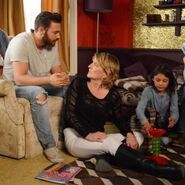 Dean gets Arrested (2016)
Add a photo to this gallery

Retrieved from "https://eastenders.fandom.com/wiki/Dean_Wicks?oldid=146813"
Community content is available under CC-BY-SA unless otherwise noted.