Co-owner of Deals on Wheels

David was born on the 18th April 1962 and is the son of Pat Wicks and her first husband Pete Beale. Pat and Pete split up when David and his brother Simon Wicks were young and Pat remarried to Brian Wicks, who adopted both David and Simon (who turned out to be most likely Brian's biological son but never 100% confirmed). Meanwhile, Pete remarried to Kathy Hills and had another son, Ian. Pete had no further contact with David and Simon when they moved away from Walford in 1976.

During his teenage years, David got his girlfriend, Carol Branning pregnant at the age of 13. David and the rest of the Branning family tried to persuade Carol to have an abortion and Carol's brother Derek Branning severely beat David up. The Wicks family were forced to leave Walford, due to Derek's ruthlessness and aggression so David never knew if Carol had the abortion or not. For the next few years David, along with his mother and brother, suffered at the violent hands of his abusive stepfather Brian. Pat also proved to be a negligent mother due to her alcoholism and constant promiscuity and after turning 17, David began living with his girlfriend Lorraine away from his parents. During this time Lorraine fell pregnant by him and after they married she gave birth to their son Joe in 1980 when David was 18. This was shortly followed by the birth of their daughter Karen in 1982. However David was a restless man who felt he had been tied down too young and after embarking on several affairs he walked out on his wife and children in 1988, losing all contact with them.

David returned to Albert Square on 23 December 1993 for the funeral of his father Pete, who had died in a car crash two weeks earlier. A few weeks later, in January 1994, he turned up on the doorstep of his mother Pat. She was shocked and said she did not even know he was alive until a few minutes ago as she had last seen him when he was 17.

David soon went into business with her stepson Ricky Butcher with a car lot that they named "Deals on Wheels". He received a blast from the past in the form of Carol Jackson and her large brood of children, who, by chance had also moved to Albert Square recently. David soon found himself falling for her oldest daughter Bianca. Carol was very frosty and hostile towards him, and was horrified when she witnessed the growing relationship between David and Bianca. This resulted in Carol telling David that Bianca was his daughter in March 1994. David was stunned but agreed to keep his distance from Bianca, much to her chagrin. When David's stepdad Frank Butcher had money worries and absconded in April 1994 after he and Phil Mitchell accidentally killed someone in a car lot insurance scam, David wondered why Phil kept asking questions about Frank's disappearance as David did not know Phil's involvement in the fire.

Eventually the truth about Bianca's paternity was revealed to an embarrassed Bianca in March 1995 when, after drunkenly trying to kiss David after he rescued her from almost being mugged, David was forced to confess that she was his daughter. Despite being initially frosty towards David, Bianca soon formed a close relationship with her father. In December 1995, David's stepfather Frank Butcher returned. David thought he was after something and fought with Frank over the car lot. Frank soon moved to Manchester.

David caused more trouble for his mother, and also he cracked under the pressure of his schizophrenic son Joe Wicks. David betrayed his half brother Ian by sleeping with his wife Cindy Beale. In November 1996, David drove out of Albert Square one night. He was bound for Milan to start afresh.

On New Year’s Day 2012, David returned to Albert Square to visit his mother Pat, who unbeknownst to him at the time, was dying of pancreatic cancer. Despite trying to keep things civil between his mother and himself, old tensions were brought back up resulting in David leaving abruptly. Despite pleas from his daughter Bianca to stay, David continued his attempt to get away.

It was the intervention of ex-girlfriend, Carol Jackson, that persuaded David to stay which as Carol cited could be has last chance to make amends and forgive his mother. Deciding to stay, David attempted to go back to Pat's house but was confronted by Carol's brother Derek, who was looking revenge on past events. After a scuffle, David managed to get back into the house where he told his mother Pat that he forgave her. Seconds later, Pat died in David's arms. David returned to New Zealand after his mother’s funeral, purely to escape from Derek Branning.

David returned to Walford again in September 2013 and disapproved of Masood Ahmed dating his ex-girlfriend. David was pleased to hear that Derek Branning had died of a heart attack recently so he could live safely in Walford again. David bought the car lot and renamed it Deals On Wheels again. He helped Max Branning cover his tracks over being a suspect in the death of Lucy Beale. Max was not the culprit anyway. In May 2014, he wanted to marry Carol again but they decided to have a parting of the ways. After suffering a minor heart attack, David then decided to leave Walford for good again. He was driven to Heathrow Airport, bound for America. 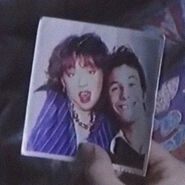 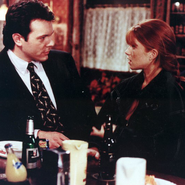 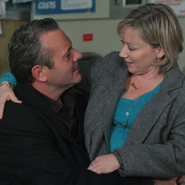 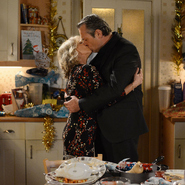 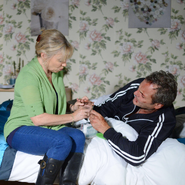