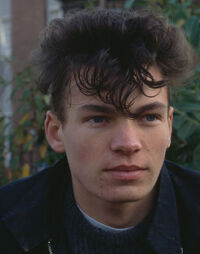 David was born in 1968 and in 1976 moved with his parents and younger brother to Surrey. He went to school in Hamsey Green and Warlingham. "But I didn't like school much at all," he once said. "There was only one good teacher."

He started acting at 12, deciding soon after that he would try to get into the profession. He then joined Saturday classes at the Sylvia Young Theatre School.

His early determination paid off, as he went on appear in BBC tv's Grange Hill, Central's 'Tales Out of School, and played the lead in the BBC Schools drama Good Neighbours.

David played rhythm guitar in a group - "just for the hell of it", and liked going to gigs. He admired a wide range of singers and groups: "'50s rockabilly and modern rockin' bands like the Deltas; also reggae, Tom Waites, The Clash and any blues or jazz," he once reeled.

He had a keen interest in the cinema. "My favourite TV programmes are Bilko, Film 84, The Munsters, The Addams Family and The Young Ones - I saw them live in 1983."

From its inception in February 1985 until April of that same year, Scarboro played the part of Mark Fowler in the BBC soap opera EastEnders. The actor did not respond well to the sudden fame the role brought him, and later became very concerned when the writers decided that the character of Mark should become a racist. Things came to a head one day when the script called for a scene where Mark was to deliver racist abuse to Paul J. Medford's character, Kelvin Carpenter. Scarboro firmly refused to play the scene. After this it was decided he should leave the show. His character was abruptly written out of the storyline; one morning his family arose to discover he had secretly moved away during the night. Mark was not seen nor heard from for several months.

In December 1985, Scarboro briefly returned to the series in a storyline where Mark was reunited with his parents. His parents had travelled to visit him in Southend-on-Sea where he had settled with an older woman who had children from an earlier relationship. Scarboro subsequently returned for brief stints in 1986 and 1987, but never returned to the series on a permanent or on-going basis. Scarboro's last appearance in the series was in the episode aired on Christmas Day, 1987.

Elements of the UK tabloid press reported that Scarboro had been fired from the show for turning up late for filming and being uncooperative on set. Away from the series, Scarboro initiated libel proceedings after several national papers published inaccurate stories about his private life, but the press continued to pursue him and his family. The News of the World discovered that Scarboro was in a psychiatric unit, and published photographs of the place. Scarboro subsequently left the unit because he could no longer get adequate treatment, and inaccurate stories about his condition were being published.

He died on 27 April 1988. His body was found at the bottom of Beachy Head. The coroner gave an open verdict on his death. A documentary on his life was produced by the BBC in 1988 titled My Brother David and was presented by his brother Simon. His parents left the country soon after their son's death.

Retrieved from "https://eastenders.fandom.com/wiki/David_Scarboro?oldid=149420"
Community content is available under CC-BY-SA unless otherwise noted.