Shot by his brother Jake

Dennis Rickman (January 2006): Stabs him in the chest on the orders of Johnny Allen.

2. Grant Mitchell (March 2006) - Attempted to shoot him to death on orders from Johnny Allen, but was later killed by Jake Moon.

3. Phil Mitchell (March 2006) - Attempted to shoot him to death on orders from Johnny Allen, but was later killed by Jake Moon.

Danny arrives with his older brother Jake Moon, as the cousin of Alfie Moon, who is not happy to see them since they are always in trouble, and it turns out that Alfie took the blame for their crime and went to prison for three years for credit card fraud. Danny worked for his enemy Andy Hunter, until his death. He has a brief relationship with Andy's estranged wife, Sam Mitchell, just to spite him. He and Jake then start working as doormen for another gangster, after Danny sets fire to Johnny Allen's house because Johnny will not take him seriously and steals his business ideas. However, before they leave Johnny finds Danny and forces him into his car. Jake then gets into the car to stay with his brother. Johnny drives them to a forest and locks Jake in the car as he prepares to shoot Danny, however Jake kicks the car window out and escapes into the woods to find them. He tries to persuade Johnny not to kill Danny. The episode ends with Johnny raising the gun at both of them, however, their fate is not revealed until a few months later when Jake turns up, where it turns out that Johnny let them go: under the agreement that they were not seen again. Johnny allows Jake to stay in Walford, but refuses for Danny to ever return. Jake reveals that Danny has gone abroad.

Johnny returns and is intent on killing the Mitchells with Danny's help. Danny is again confronted by his brother. During the conversation, Danny produces a mobile phone with video evidence that it was he who had killed Dennis Rickman on New Year's Eve. After a short struggle, Danny knocks Jake unconscious with a baseball bat and, under Johnny's orders, marches the Mitchells into the nearby woods armed with the shotgun and a spade with the intent to kill and bury them. Just as he was about to kill Grant Mitchell, Jake appears with a pistol that Danny had dropped during the earlier struggle and, only meaning to shoot his brother in the arm or leg to save the Mitchells, accidentally fires a fatal shot. Danny is killed instantly, and Jake then tells the Mitchells that it was Danny who had murdered Dennis. Jake secretly buries Danny in the woods where he died, with only the spade to mark his grave. Only the Mitchells, and the Allens are aware that he killed Danny, Jake insists that he never intended to kill his brother. As of April 2014, his corpse has never been found. 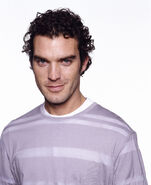 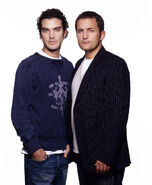 Danny and his brother, Jake Moon 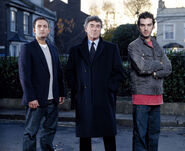 Danny with Johnny Allen and Jake

Retrieved from "https://eastenders.fandom.com/wiki/Danny_Moon?oldid=211288"
Community content is available under CC-BY-SA unless otherwise noted.