Danny is the youngest child of Glenda and Nick Winterton and half-brother of Ronnie and Roxy Mitchell. Uncle of Danielle Jones, Amy Slater, James Branning and Matthew Mitchell-Cotton. Danny arrived for his father Archie Mitchell's funeral and to meet his sisters Ronnie and Roxy Mitchell; Archie did not know of Danny's existence before his death, as his mother Glenda Mitchell left Archie after discovering she was pregnant. Danny first appears in the show in the episode broadcast on 21 January 2010 when he turns up at his mother's house unannounced, startling her. The next week, Glenda shows Danny his father's obituary and gives him the address of The Queen Victoria public house in Walford where his sisters Ronnie and Roxy live. Danny goes to The Queen Victoria and interrupts an argument between Ronnie and Roxy. Roxy tell Danny to go away they have just buried their father, to which Danny says he thinks they have just buried his father too. After a visit from Glenda to prove that Danny is who he claims to be, Danny gets talking to his sisters who ask him to stay, Glenda wants him to have nothing to do with them because Archie is still "inside their heads". against Glenda's wishes. His cousin Phil Mitchell is unhappy, thinking he is possibly a younger version of Archie. Danny starts working behind the bar of The Queen Victoria where he meets Amira Masood. He compliments her, and they later kiss, but the next day she tells him it was a stupid mistake. Peggy Mitchell overhears Danny on the phone to Glenda and is furious, asking him to leave. Roxy insists that Peggy does not make the rules, but Danny decides to go anyway and packs his things. Before he leaves the Square, Amira's husband Syed Masood confronts him about the kiss, but he assures Syed he will never be returning.

Several weeks later, Peggy receives a call from the police station. When she gets there, she finds Danny shouting to be let out, bloodied and bruised. He explains he had an argument with Glenda and left home, then got in a drunken fight and was put in cells to sober up. He tells her he hoped Roxy would come as Peggy hates him, but she confirms his identity and he is able to leave. He reunited with Roxy who is very pleased to see him, and after a heart-to-heart with Peggy, he vows to help her get The Queen Victoria back from Roxy. Roxy is angry with him for putting the bust of Queen Victoria back on the bar as it was used to kill Archie, but he tells her it is what Archie would have done and she should make him proud. He later sabotages a pump at the pub so Roxy is forced to ask for Peggy's help, and convinces Roxy to buy the beauty salon that is coming up for auction. He is befriended by Janine Butcher who wants to turn him against his family in order get Roxy's inheritance. Ronnie tells Roxy he cannot be trusted, but he reveals Janine's plan, cementing his place in the Mitchell family. He and Glenda then plan to con Roxy out of her inheritance themselves. He later tells Ronnie that Roxy has hardly any money left because she is spending it on expensive things she hardly uses.

Roxy is curious when Danny asks her for a £700 investment, which he later returns in full, having apparently made a profit. She asks him if she can invest £1000 for his friend to do the same for her, and she is satisfied when she sees him going into a building and meeting somebody. Danny speaks to Glenda on the telephone and tells her to pack a bag. Later, Roxy overhears him on the phone saying he can get a bigger return if he invested more money, so she offers to go halves with him. Danny thinks Ronnie may have figured out his plan when she asks to invest as well, and says he was too late and the deal is off. Glenda arrives in a taxi and Danny tells her he thinks Ronnie is on to him, to which Glenda says they cannot leave empty handed and Ronnie cannot stop them. Glenda urges Danny to find out if Ronnie knows. Ronnie denies overhearing Danny's telephone conversation with Glenda, though Danny tells Glenda that Ronnie is playing games with him. Danny gives Glenda a plane ticket to the United States and says he'll meet her at the airport. Ronnie tells Danny she has worked it out – that Danny is seeing someone. Danny agrees and says it is a married woman, and then calls Glenda to say Ronnie knows about their scheme and Glenda should go to the States on her own. However, she simply tears up the ticket. Glenda returns, having been evicted from her flat, and blackmails Danny, saying unless he persuades Roxy into letting her stay she will reveal their plan. After Roxy tries to evict Glenda, she reveals bruises on her arm and says that Danny has been hitting her. She also tells Ronnie and Roxy that Danny is not Archie's son. Roxy does not believe her at first but then tells Danny to leave.

In 2016, Glenda returns to Walford and receives a phonecall from Danny asking her of her whereabouts. A few months later, Glenda returns looking for Roxy, as she has borrowed £3,000 from her and Danny before disappearing. At the end of the year, Roxy calls Glenda to collect her from Walford because she realises she needs help because of her cocaine habit; Glenda and Danny both collect Roxy. The next day, Danny and Glenda bring Roxy back to Walford to collect her things, and Ronnie invites them to her second wedding to Jack Branning that day. After the wedding, Ronnie and Roxy both drown in the hotel swimming pool. Danny supports an emotional Glenda when she identifies Ronnie and Roxy's bodies with Jack and his brother Max Branning. Danny shows indifference to his half-sisters' deaths and asks about inheritance but is forced to end the subject when Glenda emotionally breaks down as a result of her grief. Danny flirts with Whitney Carter but she pushes him away when he tries to kiss her. When Glenda intends to take custody of Matthew, Danny tells Jack that he can get Glenda to change her mind in exchange for £20,000, so Jack attacks Danny shortly before Glenda tells Jack that she is not doing it for financial gain. She slaps Danny upon learning of his plan and Jack throws him out. 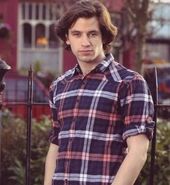 Danny with Ronnie and Roxy. 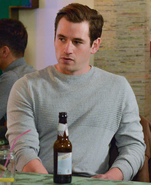 Danny Mitchell in 2017
Add a photo to this gallery
Retrieved from "https://eastenders.fandom.com/wiki/Danny_Mitchell?oldid=198313"
Community content is available under CC-BY-SA unless otherwise noted.