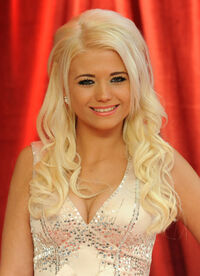 She was working as a waitress when she landed the role of Lola and is one in five British soap actresses to perform giving birth in a live episode. Her other credits include Casualty, Fanged Up, Two Graves, Monster and Dead Ringer. She also has a few under production or waiting to be released/aired. In 2011 she appeared on the reality television series Jamie's Dream School for seven episodes.

Retrieved from "https://eastenders.fandom.com/wiki/Danielle_Harold?oldid=149408"
Community content is available under CC-BY-SA unless otherwise noted.