Former; regular
DI Steve Thompson made his first appearance on 23 December 2019. He was portrayed by Philip Wright.

Steve is a detective inspector who is first seen helping Jack Branning to break up a fight between Callum Highway and Leo King. The following month he is later seen questioning Karen Taylor, Phil Mitchell and Ben Mitchell about the disappearance of Keanu Taylor. He later arrests Phil and Ben for Keanu's murder and presents Phil with evidence at the police station.

He visits Sharon Mitchell after Phil was released and Sharon tell him he has fled the country with Dennis Rickman Jr. He visits Shirley Carter at the The Queen Victoria pub to ask where Phil Mitchell is.

After Phil Mitchell hands himself in for the Smith-Holland boat crash. DI Thompson questioned him about the attempted murder of Keanu Taylor. Later in the interview DI Thompson received an amended statement from Sharon Mitchell saying Phil didn't cause the crash. DI Thompson tells Phil to leave and says wasting police time is also crime.

He wrongly arrest Keegan Butcher-Baker for throwing a brick at a police car. He then interview him about resisting arrest. Later in year, when he arrest Ben Mitchell, he finds out that him and Callum Highway are a couple. He agrees to let Ben go with if Callum spies on Phil and gather information to bring him down. 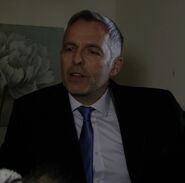 DI Steve Thompson
(16 January 2020)
Add a photo to this gallery
Retrieved from "https://eastenders.fandom.com/wiki/DI_Steve_Thompson?oldid=201384"
Community content is available under CC-BY-SA unless otherwise noted.