Alfie Moon
Spencer Moon
Craig Moon is the son of Eddie Moon and Maggie Moon. He is the brother of Michael Moon and half brother of Anthony and Tyler Moon, and the cousin of Alfie Moon. Craig suffers with Down's syndrome, like Janet Mitchell. Craig made his first appearance on 16 September 2011, and departed on 6 October 2011.

Craig first appears when Eddie takes Michael to see his brother. He is stopping at a care home for Down's Syndrome people, which upsets Michael. It is revealed that Craig loves frogs. It angers Michael when Eddie says that he brought all the cuddly-toy frogs for him. It angers him even more when Craig knows about Anthony, Tyler and half-sister Francesca "Frankie" Moon, but he has never heard of Michael. Michael storms out of the care home and returns to Walford. When Eddie finally tells Anthony, Tyler and his new girlfriend Vanessa Gold about Craig, Tyler is furious whereas Anthony is excited. When Craig visits Walford, he meets Anthony, Tyler and Vanessa for the first time. He also meets his cousin Alfie and Alfie's wife Kat Moon. After the short stay, Craig heads back to the care home. When Eddie leaves Walford, he picks up Craig and the father and son head for Spain, to visit Eddie's daughter, Frankie.

Michael cares for Craig and is touched when he realizes Craig as a St Christopher like him of his mother which makes Michael bond with him more and see him and treat him like family. 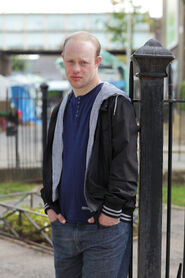 Add a photo to this gallery
Retrieved from "https://eastenders.fandom.com/wiki/Craig_Moon?oldid=190921"
Community content is available under CC-BY-SA unless otherwise noted.