Colin Russell is a fictional character from the BBC soap opera EastEnders, played by Michael Cashman between 5 August 1986 and 23 February 1989, followed by a brief return in 2016. Colin is portrayed as a middle-class yuppie with a kind heart. The character is Walford's first on-screen gay resident and he featured in the UK's first homosexual kiss on a soap opera, which caused controversy in the British press.

Colin Russell was born in 1951 in London. He had a brother Bill Russell. When Colin told his mum Ena Russell that he was gay, she and Colin's Dad disowned him. Dot Cotton cared for Colin and stood by him.

Colin, a graphic designer, moves in to 3A Albert Square in August 1986. He is one of several middle class characters who move to working class Walford in the late 1980s, attracted by relatively low property prices. Colin is homosexual but he keeps this from the other residents of Walford initially, causing embarrassment for Debbie Wilkins when she makes a pass at him. In November, Colin acquires a younger boyfriend named Barry Clark who he meets off-screen at a disco. Barry moves in to Colin's flat, and when Dot Cotton discovers they are sharing a bed, she is mortified and spreads rumors that Colin has AIDS. Some of the community shun Colin, refusing to speak to him as a result. Despite this altercation, Colin and Dot forge a close friendship when Colin supports Dot following her husband Charlie's bigamy.

In 1988, Colin starts feeling ill, he even is unable to get up off the sofa one time. He goes to see Dr Legg who refers him for tests. The results are posted to the doctor and Colin has MS. However Dr Legg says the next attack could be 20 years away so lies to him. In January 1989 Colin finds this out and is furious but comes to terms with it. He departs Walford in February 1989 with his new lover Guido Smith. Colin then cut all ties with Walford.

It was announced in August 2016 that Cashman would reprise the role of Colin for a brief stint in September. He made his return to Albert Square, Walford, on September 8th. Now using a walking stick due to his MS, he invited Dot to his wedding to a man called Eddie and visited her when she said she couldn't attend because it conflicted with her religious beliefs. Also, Colin visited The Vic and had a brief chat with Johnny Carter. They talked about how gay people seem to be treated unfairly. Colin returned to Dot's place and together they reflected on Colin's previous time on the square, his relationship with Barry Clark, and Dot's help with supporting him when his parents had disowned him because of his sexuality. He, Dot and Sonia go to the wedding and Dot states that he and Eddie looked wonderful and that Colin spoke his vows beautifully. 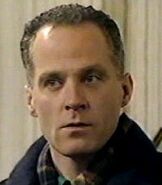 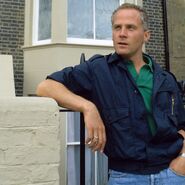 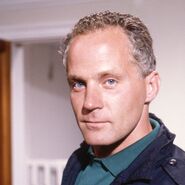 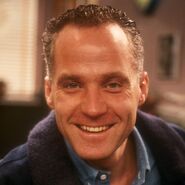 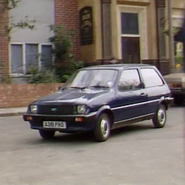 Colin and Pete have a fight, February 1988. Den breaks it up. 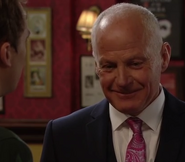 Colin Russell's Wedding Ring (9 September 2016)
Add a photo to this gallery
Retrieved from "https://eastenders.fandom.com/wiki/Colin_Russell?oldid=160123"
Community content is available under CC-BY-SA unless otherwise noted.