Serving the local community for generations.

17 April 2015 - Linda Carter was having trouble with paying for Stan Carter's funeral. Pam and Billy suggested the Solid Oak, which is the most expensive casket at £3,800. This was the casket that Carol Branning chose for Jim Branning's funeral. The package also included embalming, dressing, the hearse and one limo.

When Linda could not afford it, Pam gave the casket to Linda at cost price, which reduced £1,500 of the final amount.

June 2016 - As Babe has been blackmailing the Cokers, Les charged a lot of money for Peggy Mitchell’s funeral. 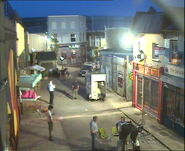 Inside the Cancer Support Society

A bill from Walford Waterboard (2015)