Maxine Palmer
Clare Bates (also Tyler) is the daughter of Liam Tyler and Debbie Bates. She made her first appearance 6 July 1993. She is portrayed by Gemma Bissix.

Clare, the daughter of Debbie Tyler (soon Debbie Bates), arrives in Walford in 1993 when her mother moves in with her new partner Nigel Bates. Her father, Liam Tyler was abusive towards Debbie, which led to them separating. Liam follows them to Walford and tries everything possible to break Nigel and Debbie up. Despite problems, Debbie marries Nigel in 1994 and Clare is happy with them; however, her happiness is cut short when her mother dies in a hit-and-run accident in 1995. Nigel falls apart and Clare has to look after him but Nigel sorts himself out when Liam returns, wanting custody of Clare but Clare is happy and does not want to leave her stepfather. Nigel fights Liam for Clare and wins after Liam is forced to withdraw his case as his girlfriend admits in court that Liam has been violent towards her.

Clare is friendly with the other young girls in Walford, Janine Butcher and Sonia Jackson. They cause trouble for the barber Felix Kawalski in November 1995, when they spread rumours that he is a pervert who has murdered his wife, and keeps her mutilated body in his cellar. Clare breaks into Felix's barber shop one evening to find the body but she trips on the cellar stairs and is knocked unconscious. The adults of Walford fear Clare has been abducted by Felix; they confront him, but find Clare safe and well. Felix has only been hiding a collection of butterflies.

In 1997, Clare starts socialising with a bad crowd at school, and subsequently begins bullying her friend, Sonia, leading to her being reprimanded by her teacher, Julie Haye. Nigel takes her to his old school to show her the pain that bullies inflict on their victims, making her see sense so she makes peace with Sonia. She then falls for a boy at her school, Josh Saunders, who rescues Clare from her old gang after they turn on her for leaving their clique. They start dating — despite Nigel's objections — though their romance hits a brief setback when Clare discovers that his mother is also her teacher, Julie. Despite her initial upset, Clare comes round and she is happy when Nigel and Julie begin dating. When Julie gets a job in Scotland, Nigel and Clare decide to join her and Josh, leaving Walford in April 1998.

On 1 February 2008, Clare returns to Albert Square; she is thrown from the back seat of a car. Nigel's former landlady, Dot Branning, persuades her to stay. Clare moves in with Dot and gets a job as receptionist at Tanya Branning's beauty parlour. Preferring rich men, Clare tries to attract the attention of the wealthy men in Albert Square. Jack Branning and his brother Max show no interest; however, Ian Beale is more susceptible despite being married to Jane Clarke. Clare flirts with Ian, wears revealing clothes and talks suggestively but she is playing a game and has no intention of taking things further, acting shocked when Ian suggests that she does. She blackmails Ian, threatening to inform Jane of his dishonourable intentions unless he pays to keep quiet but Ian tells Jane himself so she confronts Clare, warning her to stay away from Ian.

Clare becomes interested in Bradley Branning when he gets a lucrative property development job. They grow closer to him and she attempts to seduce him but he rebuffs her advances, due to recently separating from his wife, Stacey, but relents when Clare dresses up as Princess Leia to impress him. He propositions her but Clare refuses to have sex with him, breaking down and telling him about an affair she had with an aggressive, married man named Arnold. Arnold traces Clare to Walford, wanting to rekindle their affair but Clare only wanted Arnold to buy her expensive gifts and when he stopped, she fled. Clare knows that Arnold had bought his wife expensive jewellery and persuades Bradley to help her steal it by claiming that it belongs to her. Believing Arnold is a bully, Bradley agrees. The robbery goes off without a hitch, but Arnold sees Clare leaving and returns to Walford to confront her. Clare admits that she never loved Arnold and was only using him for his money. When he threatens to call the police, Clare threatens to ruin his marriage and Bradley throws him out after Clare lies that he was verbally abusing her. Satisfied with her pay off, Clare realises that Bradley is too good for her and tells him this, refusing to start a relationship, but is jealous, however, when Bradley reconciles with Stacey.

Despite starting as enemies, Clare becomes friends with her colleague, Chelsea Fox and they regularly go out together, looking for wealthy men. When Chelsea starts using drugs, her behaviour becomes erratic and she steals £100 from Tanya. Sensing an opportunity to make money, Clare also steals £100 and blames the theft on Chelsea, who is fired from her job. Subsequently, Clare and Chelsea's friendship ends.

Revealing a more vulnerable side, Clare becomes morose and upset on the anniversary of her mother's death, telling Dot that she feels alone and can only rely upon herself. The following month, she is devastated when Nigel fails to visit. She breaks down in tears, telling Bradley that she and Nigel had grown apart as she had aged. Later, she tells Garry Hobbs that Nigel was unsupportive when she slept with a boy at school and got a reputation for being promiscuous, simply putting her on the pill. Bradley's support helps Clare realise she has to change and vows to put her gold digging behind her but Bradley finds her diary that shows her plan to take his money. He subsequently turns against her so Clare throws a party at Dot's house, inviting random people who trash the place. Dot, realising Clare is depressed, tries to get her to seek counsel from God. Clare reacts with fury, but following advice from Lucas Johnson, she tries to make amends with Dot and even attempts to pray but Bradley is not convinced and insists Clare leave Walford. Clare does, leaving behind a goodbye letter for Dot and stealing £200 from Bradley, leaving in a black taxi on 7 August 2008. 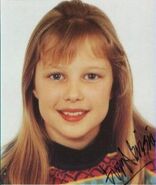 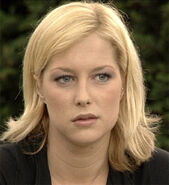 Clare Bates
Add a photo to this gallery

Retrieved from "https://eastenders.fandom.com/wiki/Clare_Bates?oldid=212386"
Community content is available under CC-BY-SA unless otherwise noted.